Price Prediction: Solana Gearing Up for 40% Jump and HUH Token Set to Surge 100%

While the bears continue to control Solana’s price, a shift in sentiment is imminent, as support is just a small 10% lower near $152. Meanwhile, HUH Token is presenting a fresh buy opportunity after consolidating to its major support level, and looks set for a 100% upswing.

Solana’s bulls are anticipating a rebound following a third test of the blue ascending trend line. Bears are likely to maintain control of price action for a bit longer, but a bullish reversal could occur soon, followed by a rise to $220, a 45% gain.

Since the beginning of December, the price of Solana has been declining as a result of renewed concerns about a new Covid variant and more hawkish tones from major central banks. As markets shrug off that narrative, a shift in sentiment appears to be underway, as equities return to the green and some additional risk-on sentiment appears to be on the horizon. This will likely spill over into cryptocurrencies, where it will likely push price action to the upside, breaking the fourteen-day downtrend.

Bulls in SOL will look for an entry near $152, bouncing off the blue ascending trend line. As bulls rush in, expect the price to accelerate rapidly and break through the first resistance level at $171. The trend is likely to continue throughout the week, with sentiment setting the tone and the SOL price possibly reaching $220 by the end of the week, netting a 45% profit. 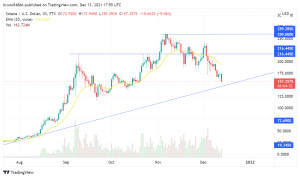 SOL Daily Chart according to TradingView

As the end of 2021 approaches, an increasing number of participants will begin to liquidate their positions, and liquidity will start to dwindle by the end of next week. This could result in choppy price action and possible violent corrections for risky assets in the event of negative news. If the blue ascending trend line breaks to the downside, SOL’s price will fall, first to $130, then to $100.

HUH Token is presenting traders with a fresh buy opportunity after consolidating over the weekend to its major support level at $0.0001236.

HUH’s relative strength index (RSI) and stochastics have moved below their bottom bands and into the buy zone, indicating that an upswing is imminent. In addition, HUH’s price has also fallen below its moving average, reinforcing the bullish outlook. 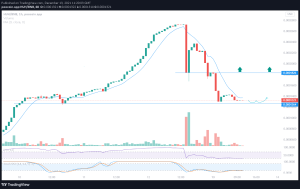 HUH 1-Hour Chart according to TradingView

However, if HUH’s price falls below the 0.0001236 support level then the bullish outlook would be nullified.

HUH Token surged over 4000% last week after its debut on PancakeSwap on Monday, December 6. The new cryptocurrency went viral after breaking into the Top 20 on PancakeSwap in just a few days of its launch. HUH has a market cap of over $110 million.

The new cryptocurrency dubbed plans on competing with other meme tokens by offering enhanced features and utilities, and has subsequently been called a “utimeme”.

HUH Token offers a novel referral system. A holder of HUH Token can refer others using a unique code provided at the time of purchase. The holder is then compensated with 10% of the first HUH purchase of the person they refer.

HUH Token is designed to increase a holder’s tokens incrementally over time, which means that the more tokens a person holds onto, the more tokens they continue receive.

Additionally, investors may be enticed by HUH Token’s announcement of $1 million in locked-in liquidity, which will be locked in for at least 2 years.

For more on HUH Token:

How to Protect Bitcoin Coins from Cybercriminals

Regulation of Cryptocurrency, All you should know

A Sled Ride To The Moon With Shiba Inu, Dogecoin and HUH Token

11 companies where you can pay with Litecoin