Its that time of year again – Back to school! Up and down the country parents and children are furiously ticking off the list of items they need before the start of term.

Pupils returning to school are now more likely to get a new tablet device than pencil case, a study into changing classroom habits has found.

Researchers found that 55 per cent of children are given a new iPad or similar device as they head back to school, compared to only 46 per cent who get a new pencil case.

It also emerged fewer kids walk to school now, dropping from 81 per cent in their parents’ schooldays to just 63 per cent now, with a third of kids preferring to use a scooter to make it to the school gates.

And almost one in three children now listen to music on the way to school instead of chatting with friends as their parents used to.

Kids are also ten times less likely to have a tuck shop selling sweets compared to their own parents’ schooldays.

While just six per cent of schools still offer a shop with sugary snacks, 63 per cent of parents admitted their old school had a tuck shop stuffed with treats.

Instead, three quarters of modern schools have a healthy lunch-box policy, usually banning nuts and many insisting on low-sugar packed lunch.

The poll for parenting site ChannelMum.com also revealed kids are more connected to their pals than in the past.

Founder Siobhan Freegard said: “Back to school is a sign of the times, becoming more hi-tech each year.

“From uniforms to devices in lessons to after-school routines, parents, pupils and schools are using the best of the modern world to make learning fun and enjoyable.

“But while the fashions and food may change but the one thing that doesn’t change about Back to School is the excitement.

“Six weeks is a long break and kids are looking forward to going back – with many parents feeling the same way too!”

It also emerged 68 per cent of parents said they rushed back to school to catch up with friends they hadn’t seen for the six-week break compared to 23 per cent now.

This is because modern kids check-in daily with friends through the holidays on social media, so already know what their schoolmates have been up to.

Uniforms are another big area of change. One third of parents wore hand-me down togs, just 14 per cent of modern children make do with second-hand uniforms.

Instead, 68 per cent are now kitted out with the latest hi-tech, Teflon coated uniforms from supermarkets ranges.

To finish off the school-ready look, one in five girls now don trendy outsize JoJo Bows, compared to 77 per cent of mums who preferred ‘scrunchie’ hairbands.

The post-school routine has also changed radically, with more than half of parents having a regular bedtime story, while a third of modern children watch daily family vlogs on YouTube like The Ingham Family now instead.

But the survey of 1,097 mums and dads revealed some schooldays things have stayed the same.

Four in five kids say they are ‘excited’ to going back to school – the same as in their parent’s day. 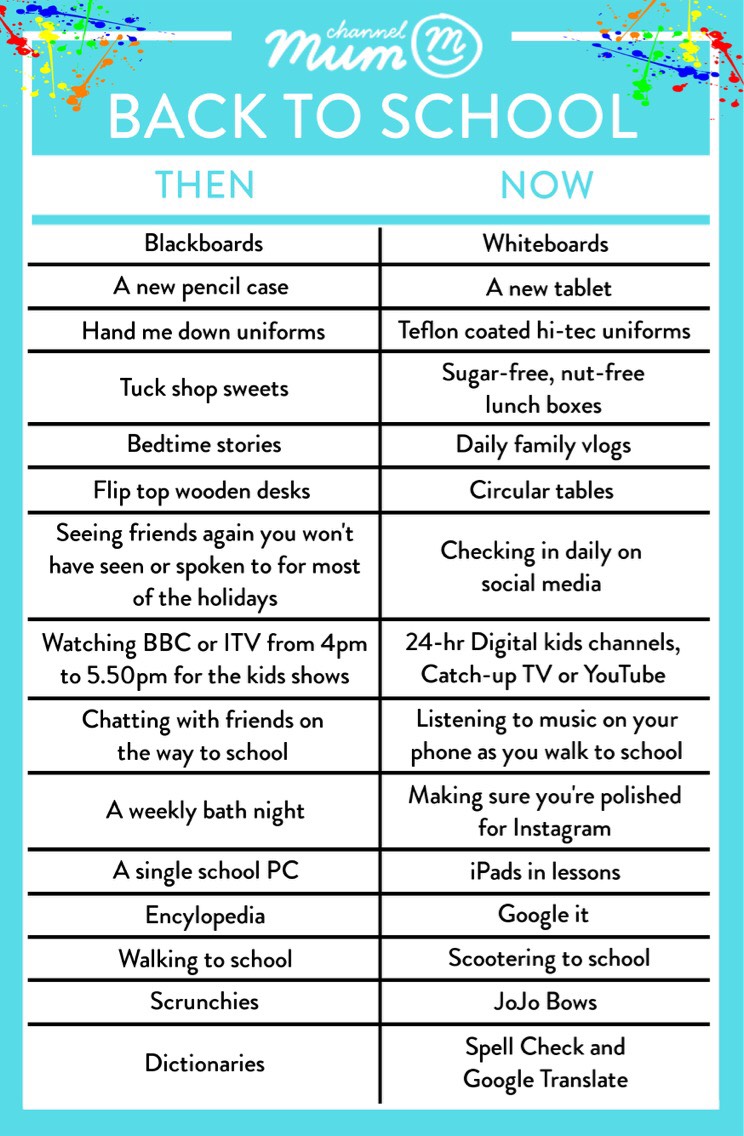