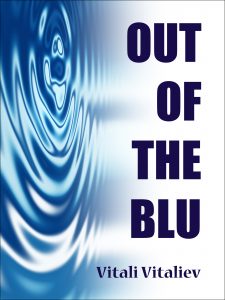 Out of the Blu by acclaimed author Vitali Vitaliev is out now.

The science-fiction comedy thriller examines the idea of the multiverse via three almost identical couples. Two of the couples have slipped through the cracks from other universes and find themselves trapped in a world, which is almost – but not quite – like their own. Through the concept of the multiverse, the book explores the eternal question of how well do we know the ones we love.

In their ever so slightly alien world, relationships between the characters become strained and new attachments are formed. The many facets of what makes humans exceptional are put under the microscope and Vitali seamlessly weaves serious topics and undertones with comedic episodes throughout the book.

The thriller’s publication is very timely, occurring the day before Hawking’s final research paper relating to the multiverse was published in the Journal of High Energy Physics. The Hartle-Hawking theory examines the existence of multiple universes, proposing that instead of being radically different, they could in fact be quite similar to one another – the exact idea mirrored in Out of the Blu.

“Against the backdrop of the multiverse, Out of the Blu scrutinises what makes us attractive, what makes us disgusting; the beautiful little differences that create our uniqueness,” said Vitali Vitaliev. “I am very proud of the ending, which I obviously won’t reveal… you will have to find out for yourselves whether the characters get back to their respective universes.”

To request a press copy of the book, please contact Francesca De Franco at: francescad@advfn.com

Praise for Out of the Blu

“This clever and engaging tale of overlapping quantum worlds explores the strangest ‘multiverse’ of all – the many selves that make up a person”
Piers Bizony (author of Atom), science writer, filmmaker

“In Vitaliev’s expert hands, science fiction is neither science nor exactly fiction – and comedy isn’t always comic. For, using the multi-universe hypothesis borrowed from quantum mechanics as his backdrop, he shows human relationships in their palpable reality moulded out of flesh and blood, and animated by the heart. The reader may sometimes laugh, sometimes cry – while always admiring the work of a true master.”
A. Boot, columnist, blogger, author of “How the Future Worked”

Vitali Vitaliev was born in Kharkiv, Ukraine. He first made a name for himself in the then Soviet Union, writing satirical journalism in Krokodil and other publications, exposing the activities of organised crime and the all-permeating corruption in the collapsing country. His fearless stance ultimately led to his defection in 1990. He has appeared regularly on TV and radio in the UK (Have I Got News For You, Saturday Night Clive, After Dark, Start the Week), was a writer/researcher for QI and has contributed to newspapers and magazines all over the world. He is the author of thirteen books, written in English and translated into a number of foreign languages, including German, Japanese, Russian, Finnish and Italian.

Vitali has recently won the Gold TABBIE Award for the Best Regular Column.

* Vitali Vitaliev is a star – Time Magazine
* The charm of Michael Palin and the wit of Clive Anderson – Time Out
* Vitaliev has an irrepressible sense of humour – The Guardian
* An ironic and witty commentator on life – The Spectator
* Vitaliev transcends his genre, producing a literary journey with lessons about what really matters – Literary Review
* A genial companion. He relishes his successes without arrogance and suffers disappointment without self-pity – The Independent

Thrust Books is an independent publisher specialising in digital books – both ebooks and print-on-demand paperbacks. We sell our titles through online stores (Amazon, Apple and Kobo).

We publish new work and republish classics that have gone out of print. Our goal is to push the envelope with creativity, imagination, quirkiness and excellence.

Our star author is journalist and writer Vitali Vitaliev. Thrust Books has republished many of his titles, including Passport to Enclavia, Borders Up! and Little is the Light.

Thrust Books was founded in 2012 as an imprint of ADVFN Books.

These Are The Top 40 Songs For The Nations Dad Dancers

Kitchen Transformation Tips: How to Build a Smart Kitchen