Is this the vehicle Prince Harry and Meghan Markle will drive off into the sunset in?

Brits believe this is going to be the vehicle newlyweds Prince Harry and Meghan Markle will drive off into the sunset in following their wedding.

The cool white sports car merges the best of British and American motoring – an Aston Martin DB11 and the iconic Ford Mustang – which topped a survey of more than 2,000 adults to uncover the top choices for the wedding vehicle.

It is also thought the motor will feature neutral ribbons and elegant white flowers for a simple and classy look.

The research, commissioned by webuyanycar.com, revealed 86 per cent of Brits believe Harry and Meghan will hop into a British car on their big day, while one in 10 imagine the motor could be a half and half American-British hybrid.

The DB11 shape forms the base of webuyanycar’s imaginary Windsor wedding car, adapted with the wheels and arches of the iconic Mustang.

The eye-catching car also sports the rear end of a classic Mustang, with a Ford bumper, chrome protection bar and two side exhausts.

The final design also reflects some more distinctive details – since four in 10 of those surveyed think the happy couple’s car will feature a personalised number plate.

One in 10 even hope the royal wedding coupé will include a special side car for Meghan’s beloved pet Beagle, Guy. 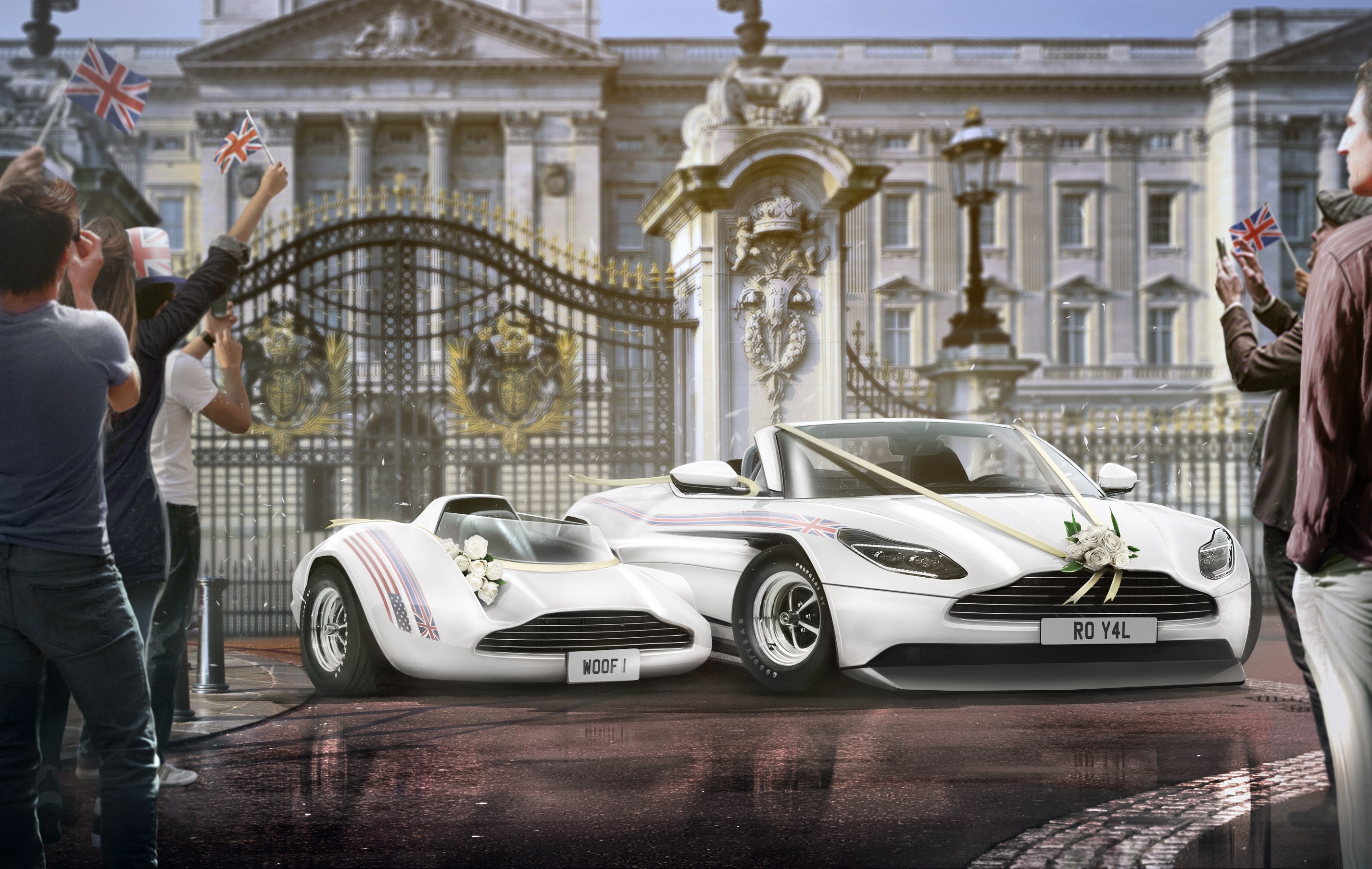 Richard Evans, head of technical services at webuyanycar.com, said: “Everything about Harry and Meghan’s wedding, from the bridesmaids and cake, to the invitation and entertainment, has been speculated on by the public.

“Of course, travelling in style is a key part of a wedding day, so we decided to find out what the public thought the royals would choose for their wedding car.

“The fact that Harry and Meghan are a modern couple, with classic style, has been reflected in our unique design, which has been crowned the ‘Royal Roadster’.

“We do live by our name of buying any car on the market and we purchase a fine selection of wedding cars and stretch limos every year.

“I doubt we will ever see one as unique as the Royal Roadster, however.

“Now we just can’t wait to see how close we got to the actual car the couple choose for their big day next week.”

The car’s name, Royal Roadster, was a clear winner, with almost 60 per cent of the vote, beating off other potential suggestions including the ‘Monarch’s Motor’ and ‘Prince’s Pit Stop’.

One in twenty of those polled think the car will be decorated in celebration of the two nations, donning star-spangled banners and union jacks.

And after tying the knot at Windsor Castle, 80 per cent of people said Harry would be the one to open the car door for Meghan like a true gent.

In true royal fashion, three in five think the car will be driven by a member of the Royal Household Staff.

But nearly one quarter believe all tradition will go out the window with Prince Harry sitting behind the wheel on his big day.

Following their reception, many think the couple will head back to Buckingham Palace to greet their adoring fans.

And one in 10 toyed with the notion that the newlyweds will head up to Balmoral to enjoy married life away from the public eye.

During their journey to their next destination as husband and wife, half agreed ‘Perfect’ by Ed Sheeran is the top choice of song to play in the wedding car.

While 14 per cent named ‘Endless Love’ by Lionel Richie and Diana Ross as the driving theme tune Harry and Meghan will choose to start their new lives together.

Nearly a third of people believe the couple will stash USB chargers in their wedding car to charge their phones so they can catch up on congratulatory texts after the drive.

While nearly one quarter are in high hopes that the royal love birds will have a selfie stick on board to take snaps of their big day.

The research also found that 63 per cent will be tuning into the big day.

InvestEngine gets active for Women’s Aid