GM Wagmi Set to Fall Another 23% and HUH Token Looks Set to Breakout After Announcing $500,000 Giveaway

GM Wagmi looks set to continue its downtrend with a Fibonacci retracement level of 23.6% predicted. Meanwhile, HUH Token is giving away $500,000 worth of tokens to 25 depositors between now and December 26, which could be the impetus it needs to breakout of its symmetric triangle pattern and send it on a 57% upswing to test all-time highs.

GM Wagmi looks set to lose a further 23.6% as the chart indicates the downtrend from Nov 15 is set to continue. GM’s daily chart is showing a descending triangle, which is an indicator of bearish sentiment and with no support levels under the current support floor at $0.00015589, investors can expect GM to break downwards to the Fibonacci retracement level of 23.6%. 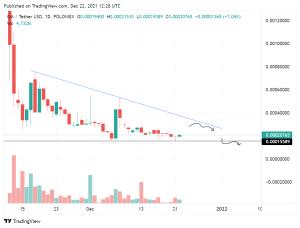 GM Wagmi has already lost an eye-watering 80% from its all-time high on November 12. Even if bulls can break the blue downtrend line, traders can anticipate a bull trap waiting above these levels as holders who were locked in due to the sudden fall will sell to try recover losses if the price moves higher.

However, if GM Wagmi can break above the downtrend line and then break above the first resistance at $0.00070000, then the bulls can begin to build a base and start a possible trend reversal. Traders should be wary as this seems very unlikely.

HUH Token has announced a $500,000 giveaway to 25 depositors on PancakeSwap from now until December 26, which might serve as the impetus needed to break HUH’s symmetrical triangle on a 4-hour chart and send it on a 57% upswing to test all-time highs.

“The rewards will not be vested and winners can sell immediately if they choose”, according to the announcement.

Fortunately, all wallets can be tracked on BscScan so holders will be able to see if they are in the top rankings. 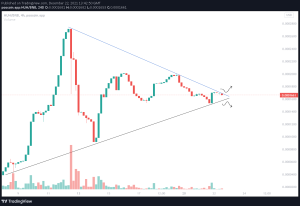 HUH 4-Hour Chart According to TradingView

The timing of HUH’s new competition could serve as the perfect impetus to drive its price through the upper blue line, initiating a long-term bull trend and sending the price up to test its previous all-time high – a rise of over 57%.

HUH Token launched on December 6 and surged over 4000% in a week, breaking into PancakeSwap’s top 20. HUH has been listed on popular indexes such as CoinMarketCap and CoinGecko. It was also launched on Bitforex on Monday December 20, resulting in a positive price movement.

HUH Token’s creators have outlined a detailed plan in their WhitePaper to continue growing the new cryptocurrency, with the goal of breaking into the top 20 global cryptos by the end of 2022.