Here Are The Milestones Kids Should Pass By Each Their Age

Children should be able to tie their shoelaces at eight, ride a bike at seven and be trusted to have their own front door key by 14, according to parents.

A survey of 2,000 mums and dads found they have a very clear idea of when their children should have achieved, or be allowed to do, particular things.

Parents also believe the kids should be allowed pocket money at nine, start putting their own clothes in the wash at eight and be old enough to have a Facebook account at 14.

Youngsters are also considered mature enough to walk to school alone and have their own mobile phone at 12 years of age.

Commissioned by My Nametags, manufacturer of durable sticker and iron-on labels, the research among parents with kids aged two to 18, also found 70 per cent believe privileges are granted too soon nowadays.

Lars B. Andersen of My Nametags, said: “The survey just goes to show some of the many intricacies of being a parent.

“Of course, every child is different and may be able to do things or take on certain responsibilities later or earlier than our results show.

“However, it’s fascinating to get some indication of when mums and dads will typically allow or expect their kids to do certain things.”

Once they reach 16 they can have friends over when mum and dad aren’t around and also be out after dark.

While 15 is the age they can listen to explicit songs, go on dates and start buying their own clothes.

Parents are happy for their youngsters to have a TV in their bedroom at 11 years old and trust them to surf the web unsupervised when they are 12.

WhatsApp and Snapchat accounts are permitted at 14, while MP3 players and tablets are allowed at 12 – and laptops are considered acceptable at 13.

Ten is the age they can have friends over for sleepovers and go to their pals for overnight stays too.

And 13 is the point when parents trust their children to be in the house alone and also go out on their own.

Those polled believe children can stay up until 8pm at eight years old, not go to bed until 9pm aged ten and not get their heads down until 10pm aged 12.

Twenty-nine per cent of mums and dads consider themselves to be stricter than other parents.

However, 56 per cent said they granted many of the privileges featured in the research earlier than they were granted them by their own mums and dads.

Four in ten said they feel peer pressure from other parents to allow their kids to do certain things, while half have fallen out with their partner over the kid’s privileges.

Teaching children the value of belongings and how to avoid loss are among the things that cause mums and dads the most problems as their youngsters get older.

Andersen, added: “It’s also really interesting to find that a parent’s biggest worry is their child losing something, especially as we don’t expect children to be responsible for their possessions until the age of ten – which is halfway through primary school.

“That’s a lot of school kit which can go missing before they learn to take care of it, exactly why our name labels for children are so popular.” 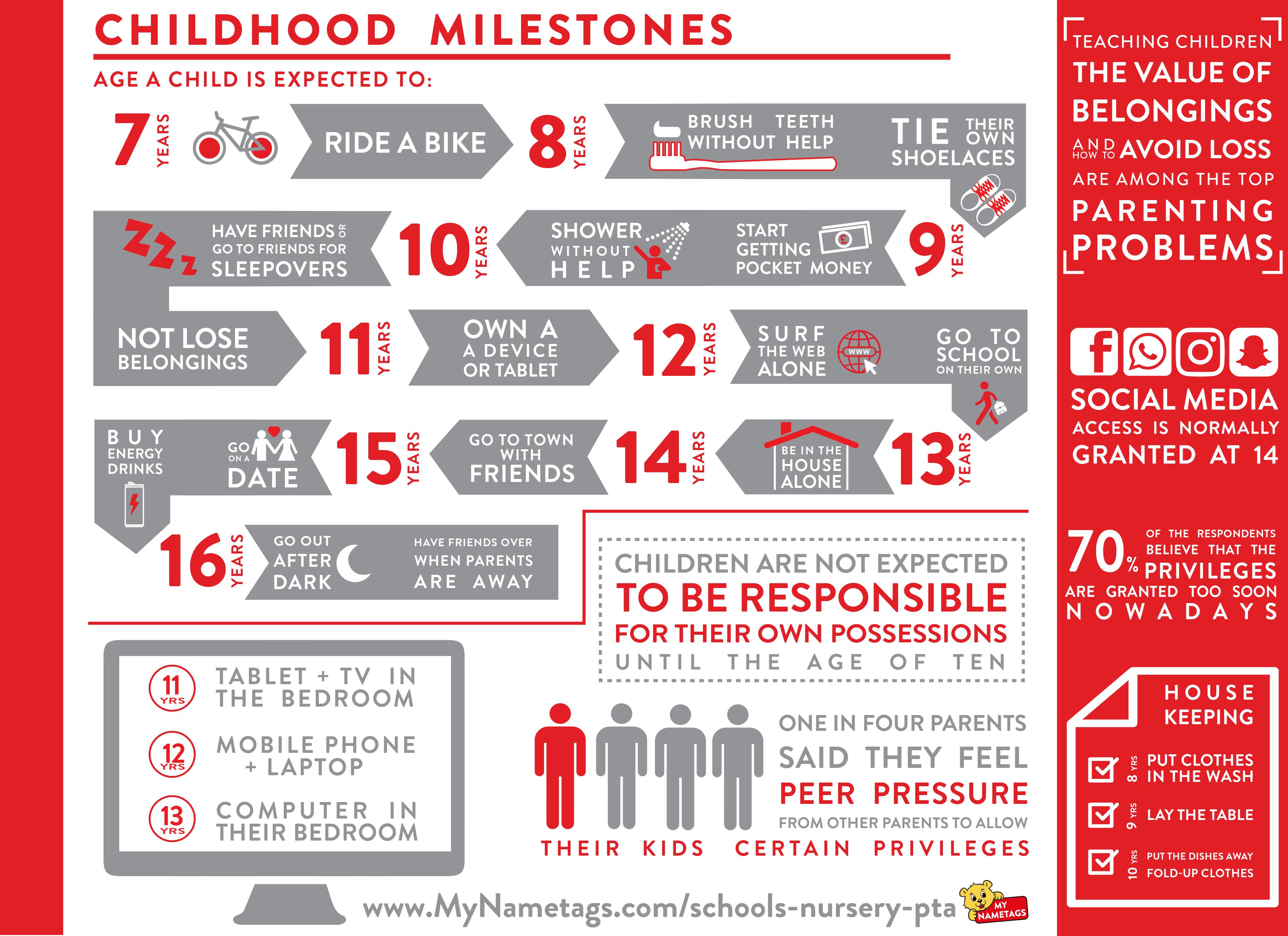 AGE OF EXPECTATION – A TIMELINE:

Have friends over when parents are away

Go out after dark

Go on a date

Buy their own clothes

Have a girlfriend or boyfriend round to visit

Go to town with friends

Have their own front door key

Go to the cinema with friends

Be in the house alone

Go out on their own

Go to the shop on their own

Have a computer in their bedroom

Walk to school on their own

Own a mobile phone

Play at the local park unsupervised

Have an MP3 player

Have a tablet device

Have a TV in their bedroom

Put the dishes away

Take care of their school uniform

Not to lose belongings

Understand the value of their possessions

Be allowed to choose what they wear

Have friends over for sleepovers

Go to friends for sleepovers

Fold-up clothes when they take them off

Get ready by themselves

Bath or shower without help

Tie their own shoelaces

Put their own clothes in the wash

Brush their teeth without help

There is a hidden reality among the remains of generations, extinguished and renewed a thousand times.