Bleary-eyed Brits could soon be ferried home at the end of a long day on this ultra-luxurious bus – fitted with BEDS.

Passengers on the vehicle, which designers hope will eventually operate on eight routes across four UK cities in Autumn 2018, will be able to sleep off their excesses in 14 discreet futuristic pods.

And they won’t have to worry about missing their stop because stewards will be on hand to wake them up before they reach their destination.

The bus has been in development for four months, with Surrey-based Andersson-Wood architects working on its design.

James Cox, CEO of high-tech sleep brand, Simba who are behind the idea, said: ‘’New research shows we doze off on public transport 27 times a year and are at our most sleep deprived in December. 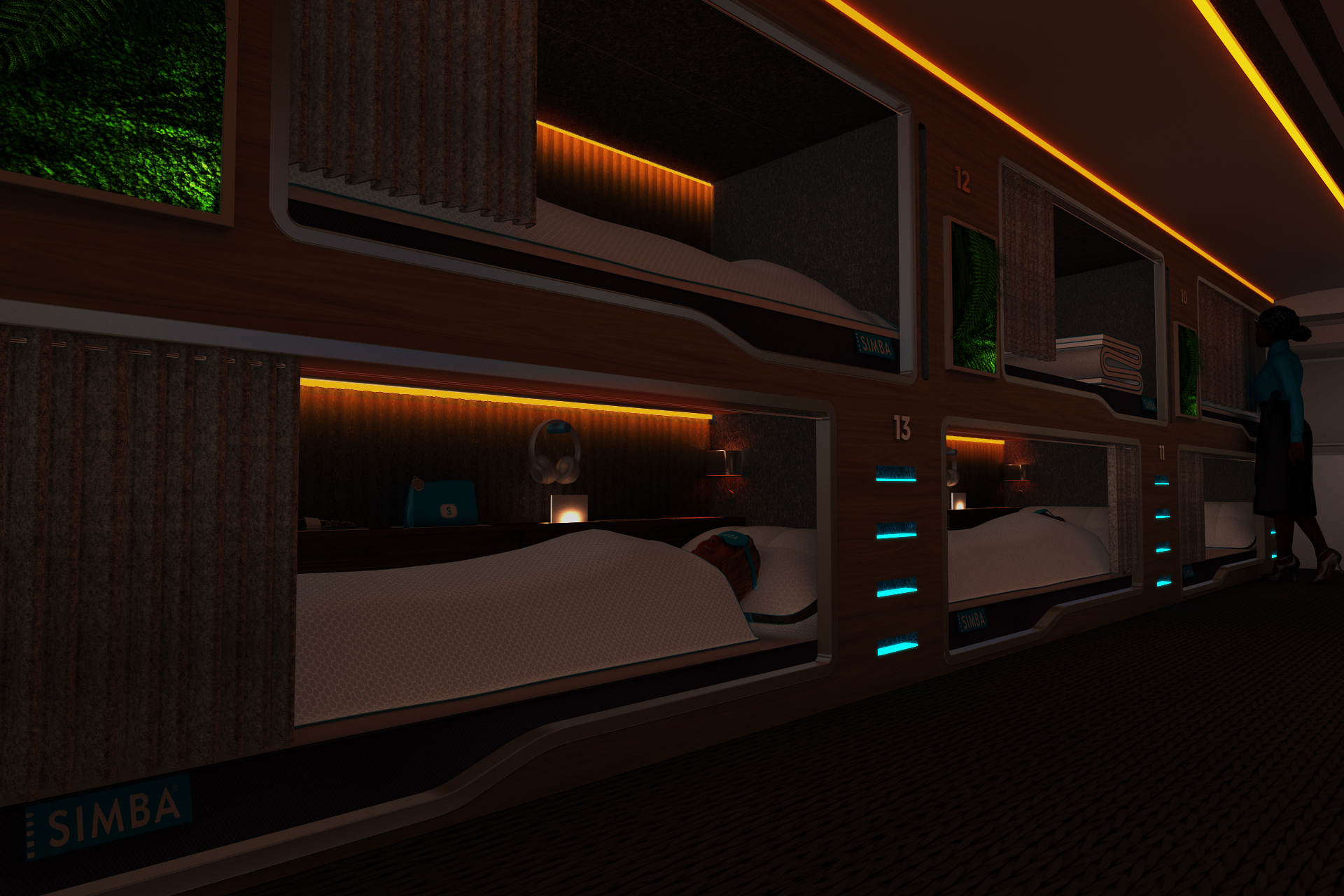 “Shift working and nights out are real sleep thieves that can rack up a serious slumber-debt over time.

“For workers and party-goers alike – the prospect of walking straight into your bed as soon as you’ve finished is the dream, but for many it can involve a lengthy commute home when you’re shattered or a bit worse for wear.

“We’re always looking at how we can use our technology to redefine an existing experience.

“The Snoozeliner service is all about helping people top up some valuable lost sleep time in a design that’s every bit as comfortable as their bed at home.”

Simba plan to fit USB chargers and WiFi to every bus, as well as a storage system for valuables.

Revolutionary software will enable passengers to tap in their stop when they board so stewards know when to wake them up.

The cutting-edge sleep pods will also have sound isolating treatments, acoustic black-out blinds and a recessed amber light-therapy system as orange wavelengths are the most conducive to sleep.

Each booth will offer a choice of soothing scent infusions, recognized by aromatherapists for their sleep-inducing or hangover-busting properties, as well as individual recessed sanitised shoe drawers and coat storage.

Simba is also in talks with a food delivery service to provide an advanced on-board system that will cleverly track your route, so you and your takeaway arrive home at the same time.

The buses will be fitted throughout with the brand’s pioneering pillow, duvet and mattress technology, which features a unique fusion of 2,500 patented conical springs and responsive memory foam layers that each provide comfort, support and heat regulation.

Simba, which has fans such as elite footballer Gareth Bale, Made In Chelsea star and Instagram fitness inspiration fan Louise Thompson, comedian Russell Kane and X Factor online presenter Becca Dudley, hopes to launch the service in Autumn 2018 with prices starting from £8.50.

The sleep firm came up with the idea after they carried out a study which uncovered a nation of sleepy commuters catching some extra shut-eye on their commute.

A resounding 94 per cent of British workers have had a siesta on their commute in the past, and one in two have dozed off on the way to or from a night out.

Workers in the South East are most likely to have a nap on public transport, notching up almost three hours of unscheduled nap-time over the year, while those in the capital steal just over two and a half hours’ sleep on the tube or the bus.

While they’re in the land of nod the average Brit will travel an extra 40 miles past their scheduled stop each year, and have to spend in excess of £30 in extra travel fees to get back home.

One in seven exhausted commuters have even found themselves stirred on the train station platform after falling asleep before their ride has arrived, while one in eight have been greeted by their bus driver at the depot after ‘resting their eyes’ on the ride home. 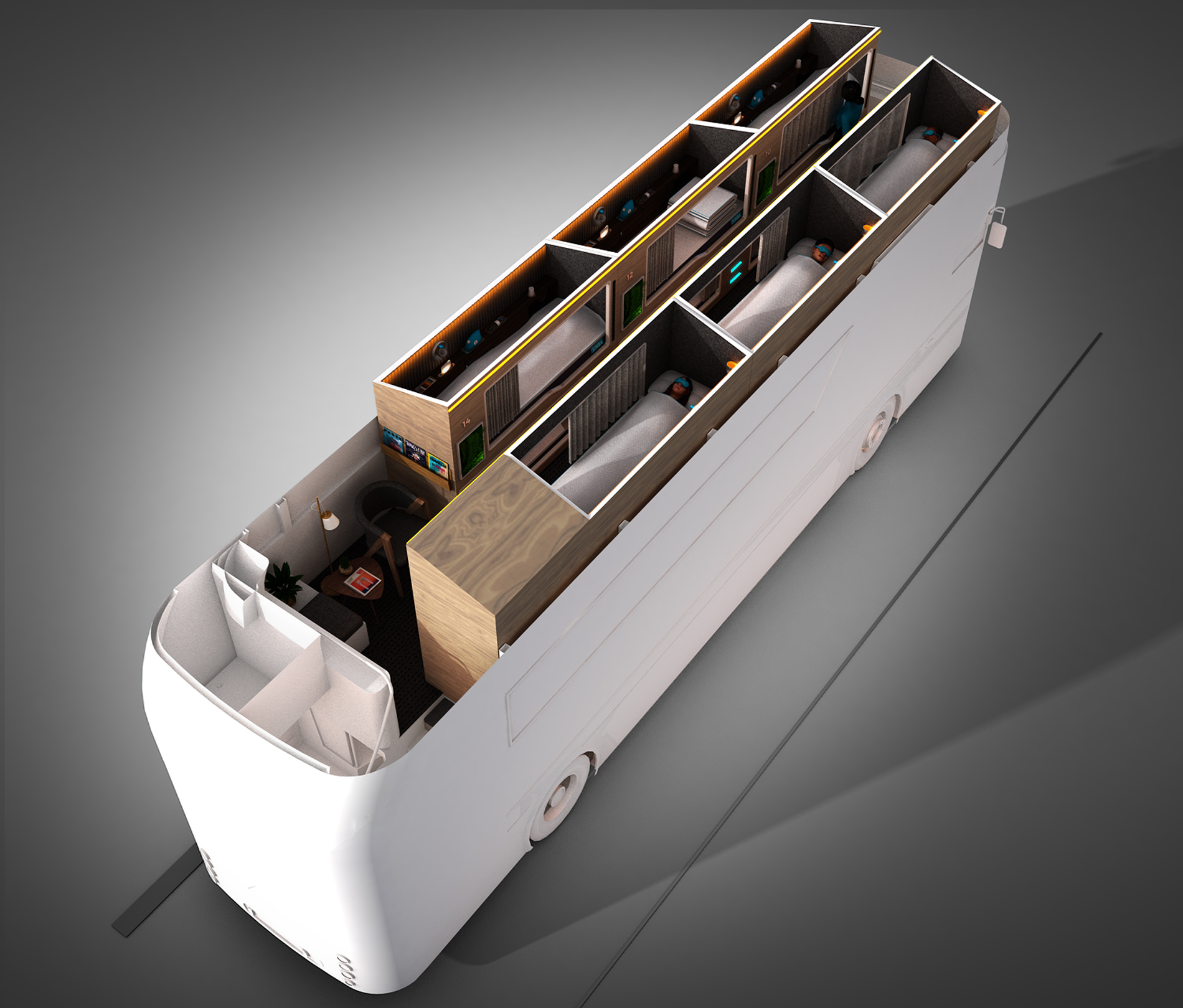 A third of worn-out Londoners have had a sleep on the underground, and two thirds of these have slept for so long they have ridden from one end of their tube line to the other.

But three in five people admit they are nervous about using public transport late at night in case they run into antisocial, drunken behaviour, and two in five fears they may become the victim of a crime.

James Cox added: “Deciding to grab 40 winks on public transport can be inconvenience on your time and wallet, and no one likes the feeling of being woken by another passenger as your stop rushes by, or shaken awake as the train reaches the end of the line miles from home.

“We think exhausted commuters deserve better, and we hope the Simba Snoozeliner night buses can serve as a much-needed service to the bed-craving masses of the UK’s biggest cities.

“We know there will be lots of red tape to wade through, but are looking forward to firming up meetings with local authorities in the New Year.”

The formula for the perfect girls night out has been found

The Average Brit Unknowingly Breaks the Law 32 Times Every Year

Divorcing A Narcissist: Tips, Tools, And What To Expect