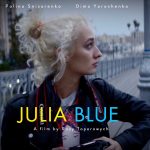 New York, NY – May 6, 2020 – KinoRox Productions and LaiLou Productions announced today that feature film Julia Blue is available for purchase and rent on Amazon Prime Video beginning today, Wednesday, May 6, 2020, in the United States and the United Kingdom.

An award winning film, Julia Blue captures the story of a young woman who comes into her own in war-torn Ukraine, where she finds her path towards independence and a brighter future challenged by unexpected love.

“The film humanizes a world historical event by dwelling not on the movers and shakers of history, but rather on how world events invade and shape the life of one remarkable young woman while bringing awareness to the war in Ukraine,” said Thelma Adams, Film Critic.

In Julia Blue, Julia, a university student inspired to study photography by the protest scenes she witnessed in Kyiv during the 2014 revolution — has now set her sights on a future outside her beloved Ukraine. A year after the revolution began, and as she awaits news from a prestigious photography school in Germany, Julia volunteers at the military hospital for injured soldiers returning directly from the war zone. She brings a carefree happiness to their ward. There she meets English, a soldier who has arrived at the hospital with easily mended surface wounds and deep emotional scars. A gentle relationship emerges that draws the two of them closer together, but each has withheld something vital from the other. When Julia brings English home for a family wedding, the cost of their secrets threatens more than their relationship. A beautiful allegory for the freedoms of our modern world that seem all too fleeting, Julia Blue reminds us not just of the cost of love and war, but of the sometimes painful choices freedom demands.

Set in 2015 in Ukraine, a country ravaged by forced Russian occupation, Julia, a bright university student, is preparing for a life abroad when an unexpected romance sparks between her and English, a damaged soldier returning from the war zone in eastern Ukraine.  juliabluethemovie.com

KinoRox Productions is a production company founded by Roxy Toporowych and based in NYC. A graduate of NYU’s Tisch School of the Arts, Toporowych has worked in Film and TV production for 15 years in a multitude of roles: filmmaker, producer, set decorator and screener. In 2014, she was a Fulbright Scholar in Ukraine, where she researched and wrote Julia Blue, her narrative feature directing debut. kinoroxproductions.com

LaiLou Productions is a Film, TV and Theater development and production company based in NYC. Iranian-American Producer, Nilou Safinya, and Syrian-British writer and actor, Laith Nakli, founded the company in order to tell often experienced but not-so-often told stories of universal humanity. lailouproductions.com

Twelve Excellent Reasons To Use A Real Estate Agent

Pregnant Women are Feeling Too Unattractive For Sex