A fifth of owners don’t know their cats are carnivores

Cat owners are unknowingly feeding their pets poor quality food as well as often handing out scraps of their own meals, including chocolate and cheese, research has found.

A study of 2,000 cat owners revealed many are oblivious about what foods could be harmful to their moggy’s health – with some even sharing takeaways and leftovers.

A fifth of owners don’t even know their cats are carnivores – with one in 10 feeding them raw vegetables and another one in 20 serving up salad leaves. 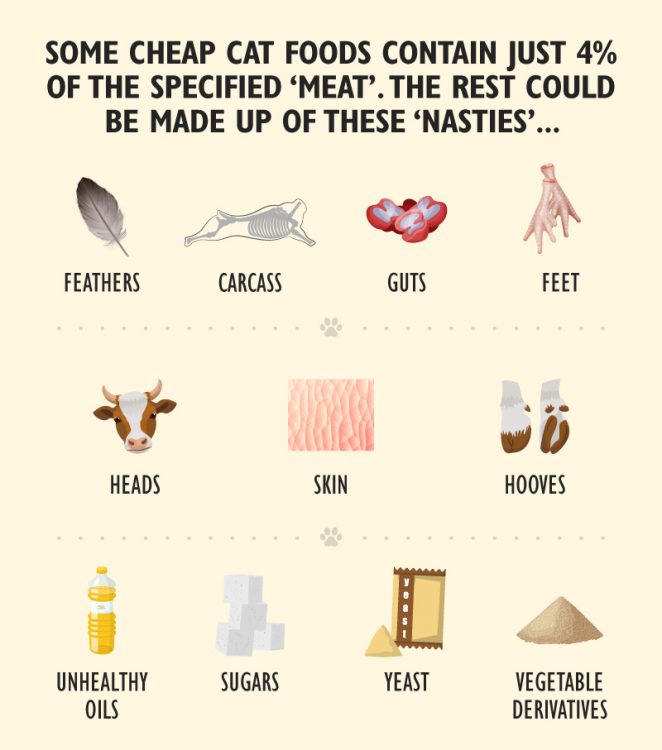 The research, commissioned by Lily’s Kitchen, to coincide with the launch of its new Suppurrs Stew cat food range, also found nearly four in 10 cat owners NEVER check the label when buying cat food, with 64 per cent baffled about what they should look for.

One in 20 simply buy the cheapest cat food on offer, and a further 15 per cent swap from brand to brand depending on what’s the best value.

But leading veterinarian Rodney Zasman has warned that serving up some of the cheaper cat foods available could be no better than feeding your cat a daily dose of McDonald’s.

He said: “It’s alarming that many of the nation’s cat owners are oblivious to what constitutes a healthy diet for their pets, particularly when healthy eating plays such a big part in modern day living for the owners themselves. 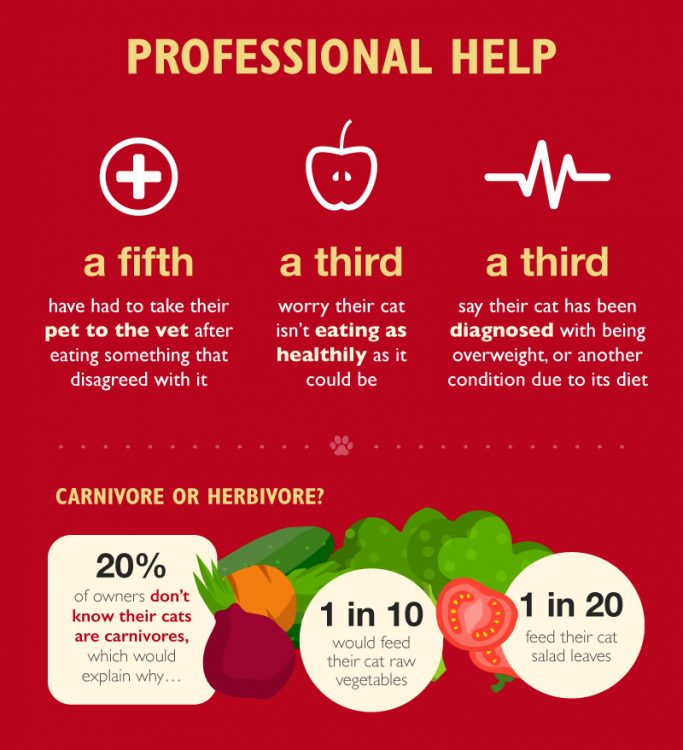 “One of the biggest dangers to our cats’ health is actually poor quality, mass produced pet food.

“In some instances these foods contain as little as four per cent meat and, as a result, cats aren’t getting the nutrition they need to keep them healthy.

“But many cat owners are largely unaware of this fact and only find out when they take their poorly or overweight moggy to the vet.”

Four in 10 Brits give food items to their cat despite not being sure it’s healthy for them while almost a quarter still give their pet treats knowing it won’t do them any good. 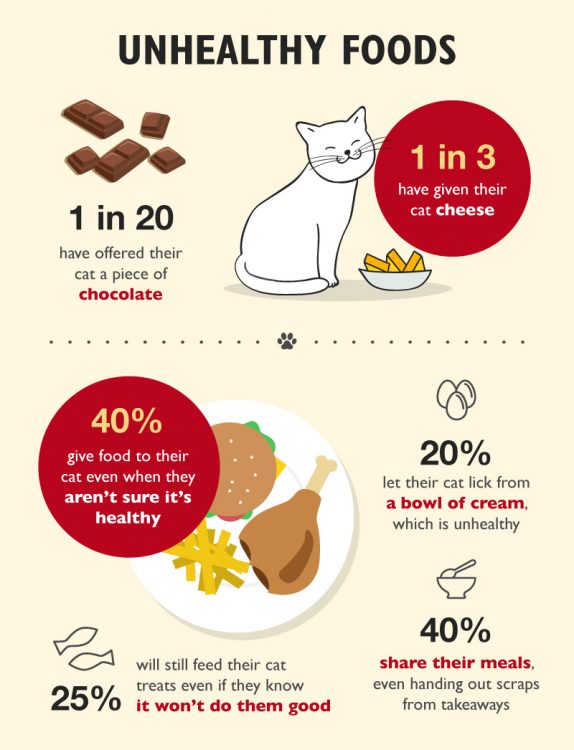 A further 40 per cent are happy to share their own meals with their cats, with a third of pet owners giving them cheese without realising large amounts can be dangerous

One in 20 have offered it a piece of chocolate and almost a fifth are happy to let their cat lick from a bowl of cream, which can be unhealthy for moggies.

One pet owner even claimed their cat loves nothing more than to nibble on a piece of leftover fruitcake, which could be harmful to the animal.

Sadly, a fifth of cat owners have had to take their pet to the vet after it ate something which disagreed with it.

A further 28 per cent admit their cat has been diagnosed with either being overweight or other medical conditions such as skin problems and diabetes due to its diet.

It also emerged that despite not being clued up on feline food needs, two thirds of British cat owners believe the food they buy covers all of their pet’s nutritional requirements. 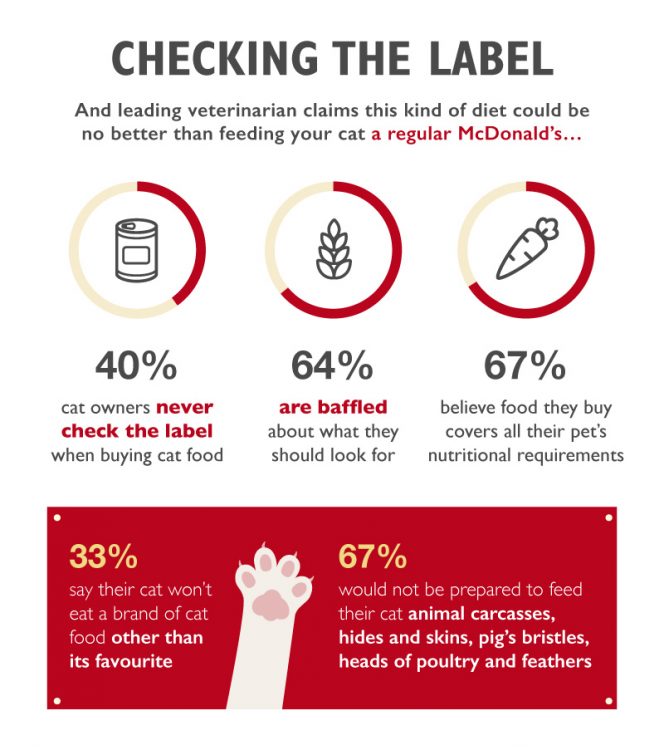 And while 67 per cent of owners would NOT be prepared to feed their cat carcasses of other animals, hides and skins, pigs’ bristles, heads of poultry and feathers, experts have warned this can be found in some cat foods in supermarkets today.

Vet Rodney Zasman added:“Feline obesity is a huge issue in the UK, as well as a host of other health complaints, many of which are caused by eating the wrong type of food which is low in real meat and high in a range of other, less nutritious ingredients, cleverly disguised on the label as ‘meat and animal derivatives’.

“In many cases it isn’t the owner’s fault however. Cats are independent creatures and often very fussy eaters so it’s not always easy to tell when a cat is becoming unwell due to its diet.

“As owners we just want to see our pets happy and feeding them something they like is usually top of owners’ priorities.”

This is reflected in the survey results, with a third of respondents saying the choice of food to provide isn’t theirs – as their cat simply won’t eat a brand other than its favourite. 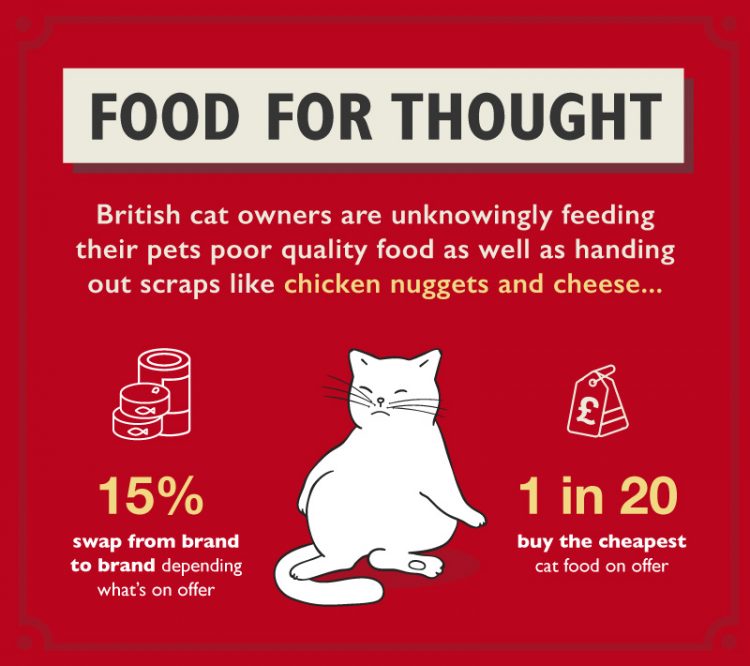 However, by patiently transitioning cats onto new foods, owners can have a much better success rate when introducing a new recipe.

It also emerged more than a third of Brits worry their cat isn’t eating as healthily as they could be, and time spent preparing pet food is a fraction of that spent cooking for the human members of the family.

Henrietta Morrison, founder and CEO of Lily’s Kitchen which commissioned the research via OnePoll.com said: “We want to help educate cat owners about what constitutes a healthy diet – including proper meat and natural ingredients – which will keep the nation’s cats purring happily and healthily.

“What concerns us most is the amount of ‘nasties’ that are contained in some of the mass-produced cat food available in UK supermarkets, including cheap bulking ingredients such as cereals, which cats can find difficult to digest.

“Cat owners don’t stand a chance when the labelling is so misleading and doesn’t state clearly what the packet or tin contains.

“In some cases, meat and animal derivatives with only 4 per cent of the specified ‘meat’ are included in the total ingredients, which could be anything from feathers and skin to heads of poultry.”

Lily’s Kitchen’s new Suppurrs Stew range of food for cats is made using only proper meat and offal, with 33 per cent delicious shredded chicken fillets and absolutely no meat-meal, fish-meal, bone-meal or rendered meat.

Why you should buy a Dog Proof Cat Litter Box