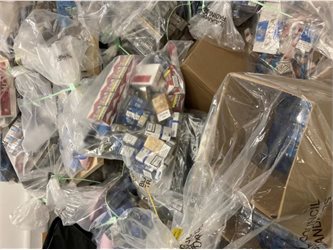 Blackpool Council’s Trading Standards team has conducted an operation designed to target the sale and supply of illicit tobacco products.  As a result, huge quantities of smuggled and counterfeit tobacco have been taken off the market.

The new initiative, part funded by Operation CeCe, a National Trading Standards scheme in partnership with HMRC to tackle illegal tobacco sales has enabled the council’s Trading Standards team to increase the number and frequency of visits that they have been able to carry out with retailers in the Blackpool area. In a typical year the team make 20 visits but this has been increased to 80 in just two months.

Highly trained officers have been able to uncover hidden tobacco even when retailers have gone to extreme lengths to keep it concealed. In one premise a legitimate looking electrical panel was installed to cover the hoard.

The use of illegal tobacco can have serious health consequences for the consumer. Tobacco seized that has been sent for analysis has been found to contain in some instances, glass as well as rat droppings.

An additional safety issue is that illegally manufactured cigarettes do not self-extinguish as legal cigarettes do, and can be a serious concern as such cigarettes have contributed towards house fires nationwide.

“There’s no place for smuggled and counterfeit tobacco on the streets of Blackpool. On top of it being illegal it can really pose dangers to the health of our residents and visitors.

“I am delighted that this targeted approach has shown such impressive results.”

Appropriate enforcement action will be taken against anyone involved in the sale and supply of illicit tobacco products.