A Leeds resident has been sentenced to a 15-month custodial sentence after pleading guilty to six counts of fly-tipping and one duty of care offence at Leeds Crown Court.

This followed a complex investigation undertaken by Leeds City Council environmental enforcement officers, gathering evidence from several fly tips for which they were able to prove a link to Mr Hughes.

The investigation found Mr Hughes to have been operating a commercial waste removal business without the appropriate licenses and disposing of commercial and household waste illegally across Leeds throughout 2018 and 2019.

Due to evidence linking the offender to multiple incidents of fly tipping in the Pudsey area, council officers strategically deployed CCTV cameras at the fly tip hotspot location to detect further offences.

The CCTV camera recorded waste being dumped from the Mr Hughes’ van on a further two occasions at the same location. Further evidence was also found linking Mr Hughes to other incidents of fly tipping.

Following the Mr Hughes’ van being spotted by council officers in September 2019, the vehicle was seized, a search of the vehicle found it to be full of household waste including sofas, wood, and garden waste. As the impounded van had little recoverable value and Mr Hughes did not come forward to claim it, the van was crushed and scrapped. 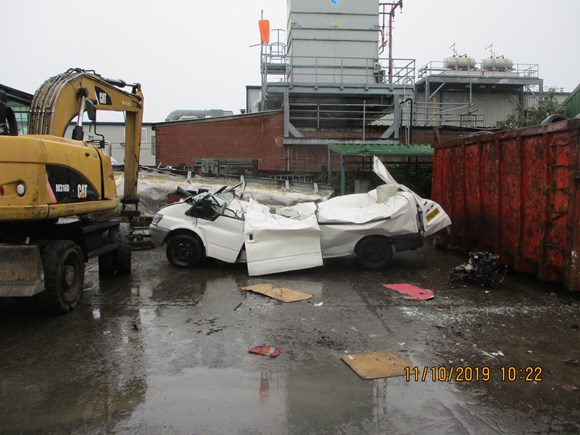 To help residents legally dispose of their waste Leeds City Council recently announced a draft of new proposals including the development of a scheme to make it easier for residents to find clearance companies with the required licenses to dispose waste legally and the increasing of opening hours at weekends for trade/commercial waste disposal at Leeds City Council waste sites. For more information visit https://gloo.to/6Vfk.

“Fly tipping is recognised as a national issue. However, Leeds City Council has a very clear message: we will not tolerate fly tipping in Leeds and will continue to prosecute anyone who believes that they can flout the rules and blight our communities and environment. It is pleasing to see the courts using their custodial sentencing power to show that fly tipping is not worth the price.

“We have recently announced the establishment of a new Serious Environment Crime Team, which will allow the council to dedicate even more time investigating and tracking down those waste collection companies and individuals who are illegally operating and creating many of the fly tips that occur in Leeds.”

The initial investigation took place across 2018 and 2019, with Mr Hughes initially appearing in Leeds Magistrates court in 2020, where he denied all charges. Due to the seriousness of the offences the case was referred to Leeds Crown Court.

Due to the significant backlog in cases at the Crown Court, the trial date was set for the Tuesday 4 January 2022. After pleading guilty to 7 counts at trial, he appeared before the crown court on Monday 7 February for sentencing.

Photos and video clip attached of the fly tips and crushing of the seized van.

motorists reminded to plan ahead