An employee of East Cambridgeshire District Council is celebrating after being awarded the accolade LABC Newcomer of the Year at a recent awards ceremony in London.

Jarred Parisi, 23, from Ely, is a member of the Council’s Building Control Team and was nominated for the award by Craig Smith, Building Control Team Leader, who has been impressed with his attitude to learn more and push himself when it comes to checking plans and carrying out site inspections. 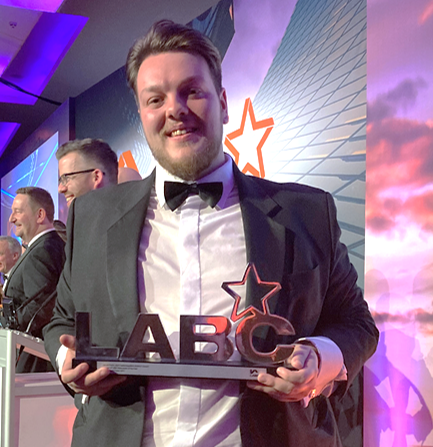 The award was particularly satisfying for Jarred, who actually only stumbled into building control as a career following a family bereavement back in 2015. As a result of this bereavement, Jarred lost his way a bit and ended up working within the Building Control department initially on a part-time basis whilst trying to get things back to track.

The admin position proved to be a turning point for Jarred, not just for his career but also for his life overall. He found he enjoyed working in a small team and began to pay more attention to the plans he was scanning; developing a growing interest for building control and what it entailed. He started asking more questions and gained a hunger to learn more. He became interested in the technical conversations the surveyors were having about buildings and when he heard the department was looking for an apprentice surveyor he jumped at the opportunity to apply and was successfully appointed to the post.

From then, Jarred hasn’t looked back. In September 2019 Jarred enrolled on the Apprentice Surveyor Degree programme and is now in the third year of his four-year course.

He is conducting plan checks on projects and is regularly out on site inspecting all manner of developments.

He was nominated and successful in winning the East Anglian regional final in October and went on to win national recognition at the award night in Westminster Park Plaza Hotel in London, where judges said they were impressed with his commitment and dedication to learning as well as his approach to site visits and feedback he received from clients. LABC (Local Authority Building Control) is made up of over 330 different Local Authorities across England and Wales, employing in excess of 4,500 people.

Jarred said: “It is an honour to be the winner of the LABC newcomer of the year award, particularly because itis awarded by esteemed people connected to the industry. I could not have done it without the constant help and support from my colleagues in the East Cambs Building Control team. Winning the award means a lot to me because it shows that hard work really does pay off. No two days are the same in building control and you are always helping people, which is probably my favourite part of the job. You also see a variety of different buildings and the way they are constructed and I particularly like that I’m not stuck behind a desk all the time – it’s great being out on site and meeting people.”

Craig added: “We’re all so pleased for Jarred. I’ve only been in post for about a year but even in this short period of time Jarred’s willingness to get stuck in and help out the team has impressed me greatly. He wants to learn and progress and hopefully, the recognition he’s received will act as an indication he’s on the right path. He can now build on this and forge a great career for himself.”

Council signs up to become an Investor in the Environment

Steeple Row to get elegant makeover