Work on Sustainable Travel improvements along Wimborne Road, Ferndown to commence in March

Work on new cycle, walking and bus infrastructure improvements on Wimborne Road in Ferndown between Canford Bottom and Trickett’s Cross roundabouts will start next month.

Construction on the first section of this project commences on 7 March between the Canford Bottom Roundabout and the Cobham Road junction / entrance to Ferndown Industrial Estate on Wimborne Road West. 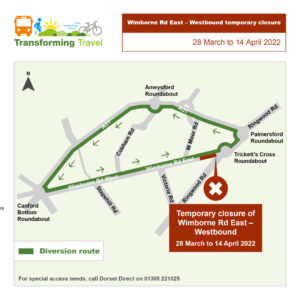 The second section will start on 28 March on Wimborne Road East, between Trickett’s Cross Roundabout and West Moors Road.

The final third section of work on Wimborne Road between Cobham Road and West Moors Road is anticipated to start following completion of section one in autumn 2022. Design work is ongoing for this section and further information will be provided at a later date.

During these works there will be a need for traffic control measures, including lane closures and diversions, though the whole road will not need to be closed. These will include: 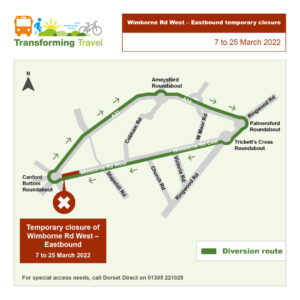 The project is itself part of the 78km network of cycle, walking and bus infrastructure improvements being delivered under the south east Dorset Transforming Cities Fund (TCF)1 programme.

The improvements will also connect to the Castleman Trailway, part of the Sustrans National Cycle Network, as well as other existing cycle routes in the area.

“It is great that we are now getting on with these travel improvements.  The Ferndown Industrial Estate, which these improvements will serve, is the biggest employment area in the county and we want to be able to offer a choice of alternative travel options to help people consider leaving the car at home and choosing a greener, healthier option to get to work, education or leisure.

“South-east Dorset is one of the most congested areas of the country and we all spend too much time sat in traffic queues in our cars, simply building more roads is not an option.  We have got to get more people out of their cars and using other forms of travel particularly for short journeys, thus easing the congestion and allowing those who still need to drive, to get to their destinations more quickly and easily.”

The work being undertaken between the Canford Bottom Roundabout and the Cobham Road junction, will include:

During this part of the project, Dorset Council will also be working together with Southern Gas Networks (SGN), who will be replacing a gas main between Uddens Drive and Cobham Road. Their work will be undertaken alongside the improvements work. This collaboration will provide synergies for the two projects and ensure that traffic disruption is reduced as much as possible.

The second phase of work being undertaken between the Trickett Cross Roundabout and the West Moors Road junction, will include:

Chair of new Education Board for Dorset appointed