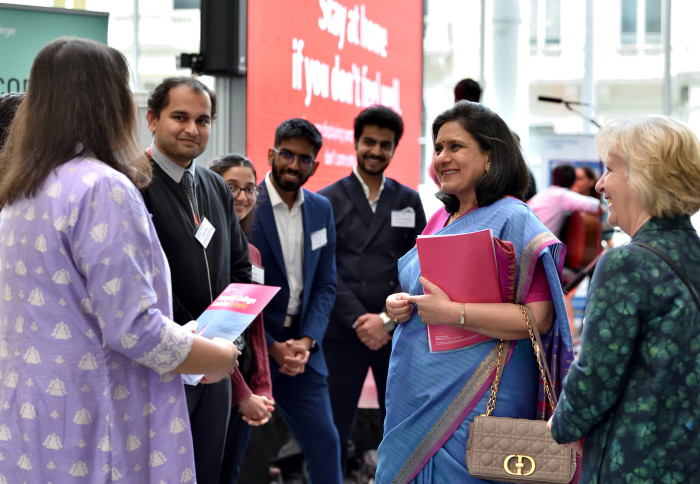 Scientists, policymakers and industry leaders celebrated the growing links between Imperial College London and India at a special event.

The UK government’s Chief Scientific Adviser Sir Patrick Vallance and the Former Principal Scientific Adviser to the Government of India, Professor K VijayRaghavan, gave keynote speeches where they highlighted the long history of scientific collaboration between the countries and the great opportunity to strengthen partnerships.

The High Commissioner of India to the UK, Her Excellency Ms Gaitri Issar Kumar, gave welcoming remarks where she outlined the priorities of the India-UK 2030 Roadmap which was launched by the two countries’ Prime Ministers in 2021.

The UK-India Science and Innovation Partnerships dialogue, brought together thought leaders from India and the UK to discuss and promote the crucial role of research, education and innovation partnerships in driving forward the 2030 Vision to create healthy, climate resilient societies.

“We are here celebrating strong India-UK cooperation in science and technology, our joint achievements and the further work we will do together.” Ms Gaitri Issar Kumar Indian High Commissioner

The High Commissioner for India to the UK, Ms Gaitri Issar Kumar, said: “It’s a pleasure to be here amongst some of the most distinguished scientists who are at the helm of science and innovation in India.

“We are here celebrating strong India-UK cooperation in science and technology, our joint achievements and the further work we will do together.

“Our Indian scientists value partnerships with their counterparts in the UK…for Covid-19 we worked together to deliver a swift solution, providing a lifeline for people around the world.”

Sir Patrick Vallance said: “Science fundamentally rests on partnerships and Indian scientists have played an enormously important part in UK science, and have been crucial to the advances here.

The Chief Scientific Adviser highlighted the AstraZeneca-Serum Institute COVID-19 vaccine collaboration which ‘has led to people right across the globe benefiting from that’.

Sir Patrick added: “India today is firmly on the path to being a science superpower.”

“Can we have a situation across science and technology where all countries come together in an open and collaborative manner to address the major challenges.” Professor K VijayRaghavan Former Principal Scientific Adviser to the Government of India

Professor K VijayRaghavan spoke about the history of UK-India science collaborations and the future challenges the world faces. He said: “Going forward we have a big challenge. We have asked future generations to pay for the environmental cost of what we get today.

“Can we have a situation across science and technology where there are major international centres, where all countries come together in an open and collaborative manner to address the major challenges.”

Imperial’s Vice Provost, Professor Mary Ryan said:  “The roadmap has a very ambitious time, but we need that going forward because the urgency of the global challenges need us to work at pace. The pandemic has taught us we can do things properly and at pace.”

“The stars are aligning for very real progress in UK India relationship and in no area is this clearer than in science and education.” Lord Jo Johnson Former Universities Minister

Lord Jo Johnson, chair of the panel sessions, said: “The stars are aligning for very real progress in UK India relationship and in no area is this clearer than in science and education.”

Professor Govindan Rangarajan urged leaders to create an India-UK data exchange to share important data. He said: “This is crucial for the knowledge partnerships to thrive.

“We need a free data agreement. Startups have demonstrated that they can tackle big problems, such as Space X and Tesla, something similar can be created in climate and health through joint funding – such as a venture fund for financing startups in these areas.”

“Together we’re tackling shared health and climate change challenges, such as antimicrobial resistance (AMR) and transitioning to clean energy.

“India and the UK make excellent knowledge partners. This is a great opportunity to explore how our partnerships can be strengthened to inform the 2030 vision for India and UK.”

In the last five years Imperial academics co-authored just over 1,200 research publications with partners at more than 300 Indian institutions.

Research partners include the Indian Institute of Science Bangalore, All India Institute of Medical Sciences, Christian Medical College, Indian Institute of Technology Bombay, Indian Institute of Technology Kharagpur, the Bhaba Atomic Research Centre and the Tata Institute of Fundamental Research.  There are currently 500 Indian students at the College, and in India there is a community of more than 3,000 alumni.   Imperial’s School of Public Health and the The Indian Council of Medical Research (ICMR), India’s top institution for biomedical research, have been collaborating to support India’s COVID response. The collaboration has involved performance modelling analysis to address key questions faced by public health authorities.