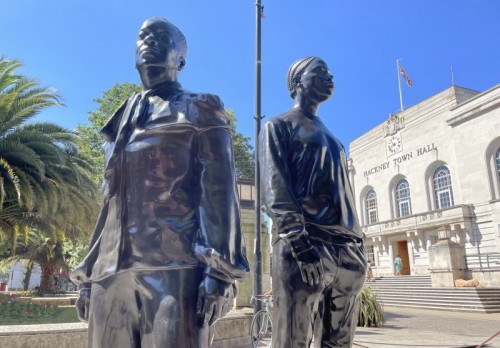 Although Windrush Day has been celebrated in the Caribbean community for years, National Windrush Day was introduced in the UK in June 2018 on the 70th anniversary of the Windrush migration. The day marks the arrival of African-Caribbean immigrants to the shores of Britain and honours the British Caribbean community. An estimated half a million people made their way to England after the Second World War.

The Hackney Windrush Art Commission is commissioned by Hackney Council and produced and curated by Create London. It is funded by the Art Fund, with additional support from the Henry Moore Foundation. The accompanying extensive public programme is kindly supported by the Freelands Foundation.

Thomas J Price was born in South London (1981). He received his BA in Fine Art Sculpture at Chelsea College of Art (2001-2004) and completed his MA in Sculpture from the Royal College of Art in (2004-2006.) Prices practice spans sculpture, photography, film and animation. Price has held solo exhibitions at prestigious institutions including The Power Plant, Toronto, Canada; The National Portrait Gallery, London, UK; and the Yorkshire Sculpture Park, West Bretton, UK. Price’s sculpture ‘The Distance Within’ is currently on view in Marcus Garvey Park, New York, until October 2022 as part of ‘Witness’; a commissioned project with Studio Museum Harlem. In 2021 he joined the international gallery Hauser and Wirth. Price lives and works in London.

Create London is an arts organisation that has pioneered working with artists to realise new social enterprises, charities and cultural spaces. It commissions, curates and incubates long-term projects that are useful to society, supporting artists to work collaboratively with local communities. It reimagines the role of the artist in the city, working outside of galleries to find new and often surprising ways for art to become part of everyday life. Create London is an Arts Council England National Portfolio Organisation. https://createlondon.org/

Art Fund is the national fundraising charity for art. It provides millions of pounds every year to help museums to acquire and share works of art across the UK, further the professional development of their curators, and inspire more people to visit and enjoy their public programmes. Art Fund is independently funded, supported by the 130,000 members who buy the National Art Pass, who enjoy free entry to over 240 museums, galleries and historic places, 50% off major exhibitions, and receive Art Quarterly magazine. Art Fund also supports museums through its annual prize, Art Fund Museum of the Year. www.artfund.org

Freelands Foundation was set up in 2015 to give more people the chance to engage with and enjoy the arts in the UK, with a particular focus on education. Their ambition is to give everyone access to art education in the belief that it raises their aspirations and transforms their opportunities in life. They have worked with more than 30 arts organisations across England, Scotland, Wales and Northern Ireland to support artists and broaden their engagement in their communities.  https://freelandsfoundation.co.uk/

The Henry Moore Foundation was founded by the artist Henry Moore and his family in 1977 to encourage public appreciation of the visual arts. Today they support innovative sculpture projects, devise an imaginative programme of exhibitions and research worldwide, and preserve the legacy of Moore himself: one of the great sculptors of the 20th century, who did so much to bring the art form to a wider audience. https://www.henry-moore.org/

Kathy Sledge Teams with PB’s Operation Funk for New Single Could It Be You? –