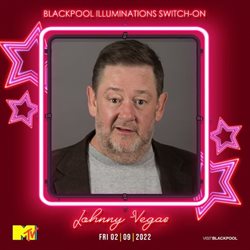 Legendary actor and comedian Johnny Vegas is to switch on this year’s Blackpool Illuminations.

Johnny, who has already provided the “voice” of a seagull that fronts the resort’s biggest ever marketing campaign, will pull the famous switch at the end of a live concert in The Tower Ballroom on Friday 2 September to trigger four months of Illuminations.

The concert, which is being produced in association with MTV, will feature performances from Blue, one of the UK’s most successful bands over the past two decades, singer-songwriter Tom Grennan and Mae Muller, one of music’s most exciting new talents.

This year’s Switch-On concert will be played out to a live audience made up of more than 2,000 winners of a free-to-enter ballot. Although the ballot has now closed, there will be a limited number of golden circle tickets going on sale later this month.

The concert and Switch-On moment will also be live streamed to a global audience across MTV and VisitBlackpool channels, and event organisers are exploring the possibility of streaming the event to an outdoor audience on the Tower Festival Headland.

Johnny is one of Britain’s best-known comic talents. He has performed in numerous TV shows including Benidorm, Shooting Stars, Sunday Brunch, Still Open All Hours, and 8 Out of 10 Cats Does Countdown. He also featured in the award-winning film, Eaten By Lions, which was set in Blackpool.

In 2021, Johnny visited Lightworks, the home of the Blackpool Illuminations, with the Salvage Hunters team and, as part of the programme, did a mock “switch on” of the Illuminations.

Two months ago, he was revealed as the voice of the Only In Blackpool TV ad campaign, spearheaded by ‘spokesbird’ Nigel C Gull, a puppet created by award-winning puppeteer Andy Heath.

The £1.3 million partnership between Merlin Entertainments, VisitBlackpool, Blackpool Tourism Business Improvement District and other partners features Nigel bringing to life the iconic seaside resort’s distinctive charm and character and reaffirming its status as the UK’s capital of family fun.

Johnny said: “As a northerner through and through, it is a real honour to be asked to switch on the iconic Illuminations. I have a great affection for Blackpool and am really looking forward to the big night in the Tower Ballroom.”

“We are absolutely thrilled to announce Johnny Vegas as this year’s Switch-On star.

“Down the years, he has been a true ambassador for Blackpool and his love of the Illuminations is obvious. Anyone who has seen the episode of Salvage Hunters in which he was quite literally moved to tears by being given an opportunity to do a mock switch-on in front of The Blackpool Tower will know that.

“This year, we are delighted to invite him back to do the real thing in front of a worldwide audience.”

Full details of the Switch-On event with updates on timings and tickets, can be found at visitblackpool.com/switchon.

Winners of the free ballot tickets will be notified over the coming weeks.

Recruitment Day for over 30 Kickstart job placements with Enveco

Students progressing due to excellent provision during the pandemic