Elephant Rock, the restored outdoor events space on Hartlepool’s Headland, has been shortlisted for a top award.

It has been shortlisted in the Small Category of the ICE (Institution of Civil Engineers) North East awards which aim to promote and celebrate civil engineering across the region.

The winner will be announced on 8th April.

Located on the promenade next to the Heugh Battery Museum, Elephant Rock has been developed by Hartlepool Borough Council. It was designed by the authority’s own in-house teams and local company Seymour Civil Engineering carried out the work on the ground as Principal Contractor. 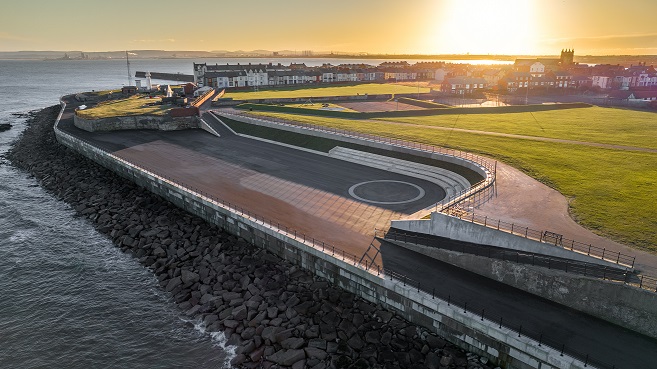 Councillor Shane Moore, Leader of Hartlepool Borough Council and a Headland and Harbour Ward councillor, said: “Elephant Rock looks great and the shortlisting is well deserved given the quality of the work carried out to revitalise this historic site.

“I would like to congratulate all involved, and I hope that their hard work receives the ultimate reward on 8th April.”

Elephant Rock has been created by the restoration of a previous site which was built in the late 1800s to provide a place for civic, community and cultural events.

It incorporated a bandstand and also served as a viewing platform for the historic Elephant Rock which stood a short distance offshore. This was an elephant-shaped limestone rock formed by a combination of coastal erosion and quarrying. Much of it collapsed into the sea following a storm in 1891.

The newly-restored site will host a range of open air performances in the spring and summer seasons, whilst also being available for commercial hire and use by community groups for events and activities.

Work is currently on-going to develop a programme of events, and further engagement will take place with stakeholders in the local community in the near future.

Have your say on Hartlepool Borough Council elections

Help us clampdown on off-road bikes