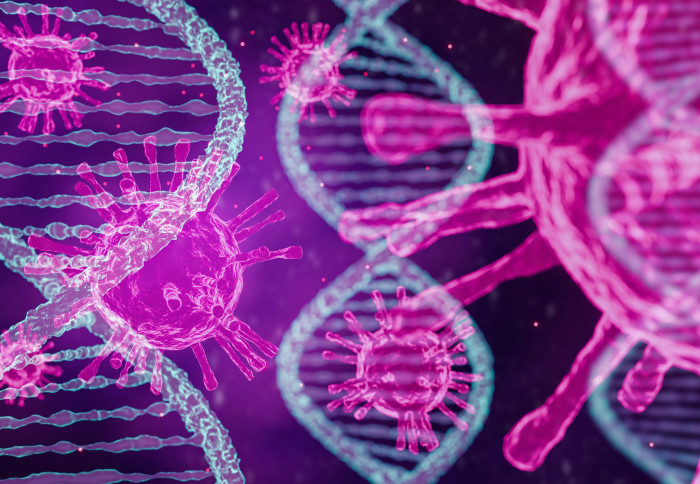 A common genetic change is associated with a reduced risk of severe COVID-19 infection, highlighting a potential target for drugs in early treatment.

A team led by Imperial College London researchers has found that people with a common genetic change to one protein were less likely to be hospitalised with severe COVID-19.

Transmembrane protease serine type 2 (TMPRSS2) is a protein present on human cells in the lungs, colon, stomach, and many other tissues. This protein plays an important role in SARS-CoV-2 infection as it is necessary to activate the virus’ spike protein, facilitating entry into the cell.

Impact on severity of infection

In the human population there are several naturally occurring variants of this protein. A large multi-disciplinary international team, led by Imperial’s Dr Alessia David and Professor Michael Sternberg, hypothesised that a common variant of the protein, called rs12329760, may affect the severity of COVID-19 infection. This variant, which changes only one of the hundreds of amino acids in the TMPRSS2 protein, is found in roughly a quarter of the population.

These results may help to explain why some people who were infected by the SARS-CoV-2 virus did not develop severe symptoms. Dr Alessia David Department of Life Sciences

The team statistically analysed the association between this TMPRSS2 variant and COVID-19 severity in 2,244 critically ill patients with COVID-19 recruited from 208 UK intensive care units between March and July 2020.

This analysis, published in Current Research in Translational Medicine, showed that individuals who had the rs12329760 variant protein were significantly less likely to be hospitalised or die from COVID-19, regardless of the presence of other risk factors, such as older age and sex. This finding was confirmed on other large COVID-19 datasets.

Dr Alessia David from the Department of Life Sciences said: “Our study highlights that a substantial proportion of the population was less likely to develop severe COVID-19 because of a change of one amino acid in their TMPRSS2 protein. These results may help to explain why some people who were infected by the SARS-CoV-2 virus did not develop severe symptoms. However, it is important to remember that vaccination still remains the most reliable way to protect us against severe COVID.”

The authors also performed experimental studies in human cells which confirmed that the rs12329760 variant reduces the ability of TMPRSS2 to activate the viral spike protein – an essential step in viral cell entry. This may explain why individuals who have this variant were less likely to develop severe COVID-19 infection.

Professor Wendy Barclay from the Department of Infectious Disease, who hosted the laboratory-based studies, said: “We knew that TMPRSS2 played a key role for virus replication in the lab, but these large-scale genetic studies really bring home how that translates into an effect that impacts the outcome of infection in the real world.”

The results of this study suggest that drugs which inhibit the activity of TMPRSS2 may have a role in the early treatment of infection from those SARS-CoV-2 variants that employ TMPRSS2 in the infection pathway.

One promising candidate is camostat mesilate, a drug already approved for the treatment of chronic pancreatitis. Recent studies have demonstrated the ability of this drug to block the entry of the SARS-CoV-2 virus into lung cells.

The research by Dr David and colleagues also paves the way for further studies to investigate the levels of the TMPRSS2 protein in different age groups. Previous research suggests that the expression of TMPRSS2 in human lungs may be age-related, potentially contributing to age as a major risk factor for COVID-19.

Very recent studies have found that the Omicron variant does not need TMPRSS2 to enter host cells, and this may explain the reduction in disease severity associated with Omicron infection. On the other hand, the previous variant Delta – which still circulates in some parts of the world – is highly dependent on the host protein, and future SARS-CoV-2 variants may also use TMPRSS2 for cell entry. Professor Sternberg said: “This means that the rs12329760 variant of TMPRSS2 will offer increased protection against some variants of the virus but not others, and that antivirals targeting the host protein might only work for infections with the variants that rely on TMPRSS2.”

Dr David also highlighted: “It’s important to remember that some people with the rs12329760 variant of TMPRSS2 were still ill enough to be hospitalised, and that the safest and most reliable way to protect against severe COVID-19 is vaccination.”

‘A common TMPRSS2 variant has a protective effect against severe COVID-19’ by Alessia David et al. is published in Current Research in Translational Medicine.