Nurse to retire after over 50 years’ service 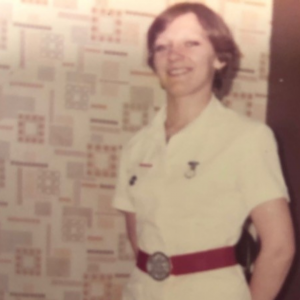 A nurse who began her career during a flu epidemic is due to retire during the Covid-19 global pandemic more than 50 years later.

“I left school at 15 and didn’t know what to do,” Joyce said. “My mother was a nurse at St Nick’s and she suggested I become a cadet nurse. I still remember my first day really well; everyone was so friendly, and it was like being part of a big family.”

Not long after Joyce started, there was a flu epidemic and staff were required to wear masks on the ward, much like today.

After qualifying as a staff nurse, Joyce worked on a busy admissions ward, and it wasn’t long before she became a ward sister. Joyce moved to working night shifts after taking time out to have a baby.

It was on one of those night shifts that she met a deaf lady who communicated in British Sign Language (BSL). Joyce wasn’t able to understand or communicate with her. This was the start of something she describes as the biggest achievement in her career.

“I’d never met a deaf person before or had seen anyone use sign language,” Joyce explained.

She saw an advert in the newspaper for a British Sign Language (BSL) taster course and decided to sign up.

“While I was doing the course I began to wonder where Deaf people with mental health issues go for help. I tried to do some research, there was no internet in those days, and I had to go to the library. I telephoned people, wrote letters, but had very little response.”

Joyce said she soon came to realise that the lack of replies was because there weren’t any mental health services for Deaf people in the area.

“The closest place was Manchester and I just thought this was so unfair that deaf people should have to travel a 300-mile round trip to see a doctor who could understand them and knew about deafness and deaf culture,” she said.

By this time Joyce was working as a ward manager and took it upon herself to set up a service for deaf people in the region.

“I started by gate-crashing a lot of consultant and GP meetings and asking people what they would do if a deaf person came into their surgeries and clinics and how they would assess their needs.

“It was at one of those meetings that I met staff from the National Centre for Mental Health and Deafness, the John Denmark Unit (JDU) in Manchester, which was the nearest service specialising in mental health and deafness, and I asked if I could work with them.”

In 1994 Joyce started working with a doctor and a Community Psychiatric Nurse (CPN) from the JDU one day a month and then in 1997 she took part in a pilot study working two days per week as a CPN, covering the whole of the North East. She soon realised two days a week wasn’t going to be enough and in 1999 left her ward manager role to work as a CPN with deaf people.

Setting up this service and developing it over the years is something Joyce is extremely proud of.

“We are a very small regional tertiary service covering two large mental health trusts, CNTW and Tees, Esk and Wear Valleys NHS Foundation Trust (TEWV). It is the only stand-alone community-based mental health service for Deaf people in England who have a consultant psychiatrist working with them. There are so few services in the country, even now, so it’s such an enormous achievement.

“Part of our role is to remove barriers for Deaf people accessing services and educate other services on how to communicate and work with deaf people. I hope the team is able to grow further to include staff from other disciplines.”

Another stand-out career moment was in 2010 when Joyce did a lecture tour in Australia with Dr Margaret du Feu (OBE). There she met with health professionals to talk about mental health and Deafness and how to work with Deaf people and make services accessible.

She met with health ministers to discuss establishing dedicated mental health services for Deaf people and visited Deaf clubs, meeting the community to talk about mental health issues. The following year, Joyce organised a Mental Health and Deafness tour of the North of England and Scotland for the chief executive of Deaf Children Australia.

In 2018, she was awarded the Trust’s ‘Chair’s NHS 70th Award’ for her achievements. The following year she was nominated by the Trust to attend the Royal Garden Party at Buckingham Palace.

Joyce has announced she will retire at the end of February following a fruitful career. She plans to spend some of her time in Spain, travelling and looking after her grandchildren.