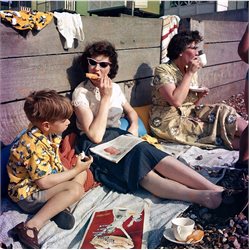 Blackpool’s Grundy Art Gallery is delighted to announce details of its upcoming summer 2021 programme which includes two linked exhibitions one taking place inside and one outside of the gallery, both of which explore our past, current and future relationship to the seaside.

Grundy Art Gallery doors will first open for the indoor exhibition of ‘Seaside:Photographed’ on Saturday 24 July between 3.00pm to 5.00pm which can then can be viewed during normal gallery opening hours until 11 September.

In addition, #WorkTownGhostTown which can already be viewed outside on the glass panels that form part of Grundy’s forecourt brings together the work of local photographers who have been documenting Blackpool over the last 16 months.

“Grundy Art Gallery’s summer programme will provide an exciting opportunity for residents and visitors alike to experience high quality artworks and world class exhibitions all set against the backdrop of this stunning Grade II listed building – which, this year is celebrating its 110th birthday.”

Taking place across all of the Grundy’s ground floor gallery spaces, this major exhibition looks at the relationship between photography and the British seaside from the 1850s to the present.

Images of the beach, hotel life, the holiday camp, dressing up and dressing down, wild waves and coastlines all combine to create a rich picture of our resorts.

Dafydd Jones, Barry Lewis, and Daniel Meadows all photographed at Butlins in the 1970s and Grace Robertson records the raucous goings-on of a women’s day out to the coast in the 1950s. Enzo Ragazzini captures the anarchy of the 1970 Isle of Wight festival, while Stuart Griffiths makes a bleak narrative of the 1990 rave scene in Brighton.

The exhibition was presented at Turner Contemporary in summer 2019, touring to John Hansard Gallery in Southampton and Newlyn Art Gallery & The Exchange in Newlyn before arriving in Blackpool this summer. A hardback catalogue of by Val Williams and Karen Shepherdson, to accompany the exhibition is available from the Grundy shop.

As part of this project, Grundy Art Gallery’s education officer, has commissioned artist Amber Akaunu to work with early years children to explore what it is like to live in Blackpool and how they feel their town should be represented. These reflections will then be translated into a range of new souvenirs which will be fabricated and displayed as part of Seaside:Photographed.

This exhibition brings together the work of four locally based photographers who have been documenting Blackpool in and out of lockdown over the last 16 months.

During this time, 100’s of photographs have been taken, many of which have already been circulated digitally by the photographers themselves and/or by the Grundy and its social media channels.

This new exhibition brings together a number of previously unseen images and document not just the changing seasons but show the ebb and flow of the town as its residents, visitors, businesses and amenities respond to the changing restrictions of the global COVID 19 pandemic.

Each of the four photographers will be represented by two photographs, with the images themselves having been transferred to vinyl film and displayed on the glass panels that form part of Grundy’s forecourt outside the front of the building.

WorkTownGhostTown is influenced by the The Mass-Observation study of Bolton and Blackpool (1937-40), known as the Worktown Project, in which Blackpool is heavily profiled as a site of mass tourism and pilgrimage for working people.

*Exhibition dates are subject to confirmation and / or change in line with government guidance.

Image: Down to the Beach. Photographer: Raymond C Lawson, 1959. Courtesy of Nicholas Cordes, with kind permission of the Lawson family.

Blackpool plans to mark the Platinum Jubilee in style

Blackpool's back – and so are two of the resort's biggest events!