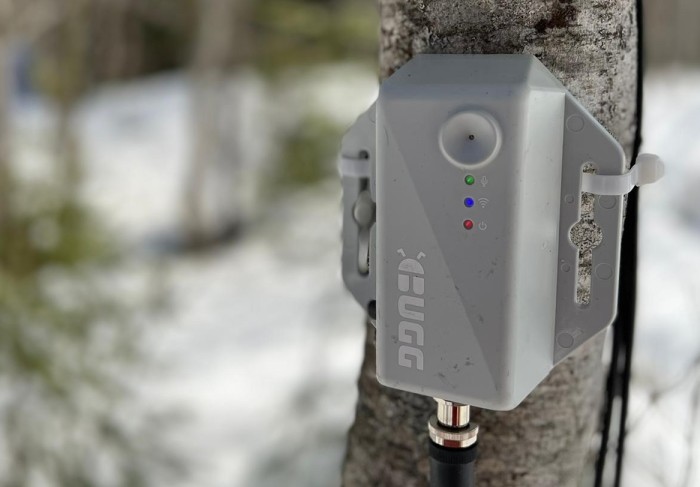 Cheap, reliable audio recorders developed at Imperial have been used to reliably identify birds by their songs in a large trial in Norwegian forests.

The researchers are exploring whether we can build up an accurate picture of the makeup of life in forests and other ecosystems using such audio devices, recording continuously.

The trial used 41 audio loggers across Norway and showed that these can identify 22 bird species with 100% accuracy from their songs, and a further 10 with more than 70% accuracy.

With continued data gathering, we can start to answer larger questions – such as how climate change is affecting these ecosystems. Dr Sarab Sethi

The audio logging system, called Bugg, comprises physical audio recorders that continuously record sound and upload it to a cloud service via mobile SIM cards. Artificial intelligence in the cloud then analyses the sound recordings in real time to extract individual bird songs and identify the species, as well as analysing the soundscape as a whole.

Analysing soundscapes in this way can make monitoring of life in the forest more cost-effective and produce better measurements of ecological status, providing a more comprehensive picture of the state of nature.

A prototype version of Bugg was tested in 2019 in the SAFE project in Borneo, where it tracked the soundscapes of forests with different degrees of disruption by logging. Since then, the team have been improving the hardware and software to make a more robust and reliable version, and the tests in Norway represent the first successful deployment of the technology at scale.

Dr Sarab Sethi, who led the development of Bugg while at the Department of Mathematics at Imperial, said: “By placing audio loggers from the top to the bottom of Norway – at a range of altitudes and latitudes – we can get data across a gradient of environments. With continued data gathering, we can start to answer larger questions – such as how climate change is affecting these ecosystems.”

The Bugg team collaborated with NINA, a research research institute working for the Norwegian Environment Agency, to trial the Bugg system. From 41 audio loggers, they recorded nearly 60,000 hours of data.

The bird songs were identified using the BirdNET model and checked by a Norwegian ornithologist. As well as identifying individual bird species, the results also show that analysing soundscapes can characterise differences between forest and semi-natural land, as well as differences throughout a season.

The team also created a Twitter bot that tweets the live sounds of birds across the Norway monitoring project. Each tweet also has a poll in the response asking people to verify whether the automatically identified bird was actually correct. The team hope that with enough of this data they will be able to improve their models going forward.

Research around the world

Following the successful trial, the team are now working with NINA to integrate the audio data into other surveys to improve the coverage. One survey is TOVe, in which volunteers throughout the country record birds arriving in the breeding season.

However, as this relies on people, it is only conducted once a year at a specific time, when most breeding birds have likely arrived. This could mean some are not counted – either they have arrived early and are no longer singing, or will be arriving later. With Bugg, the period of time can be extended, capturing a more precise picture of breeding birds.

As well as working with other projects, such as deploying Bugg on a coffee farm in Mexico, the team have made the designs for the hardware open source, so anyone can build audio loggers for themselves. They also plan to make the software open to all, so it can be used as a research tool by projects around the world.