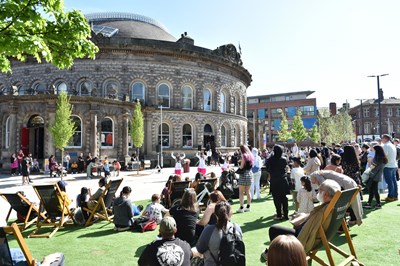 People of all ages had fun in the sun as a smart new look for one of the best-loved locations in Leeds city centre was showcased in dazzling style.

A free day of celebratory activities was held at Leeds Corn Exchange yesterday (Saturday, May 14), with a packed schedule of entertainment on offer that included arts, music and dance performances.

The event was staged on the pedestrianised open space that has been created in front of the landmark Corn Exchange over the last year by Leeds City Council and its partners.

Work on the new piece of public realm has been carried out in tandem with a major package of Connecting Leeds highways improvements that form part of the £173.5m Leeds Public Transport Investment Programme.

Yesterday’s celebration event was held to mark the completion of both the £1.2m public realm scheme and the wider £25m highways improvements project.

Speeches at the event were given by Councillor James Lewis, the leader of the council, and Councillor Helen Hayden, the council’s executive member for infrastructure and climate, together with Rushbond managing director Jonathan Maud and Sisk contract manager Peter Dawson.

“It was wonderful to see so many people out enjoying themselves at the event – there was a lovely atmosphere and we were delighted to receive plenty of positive feedback.

“We are really proud of the improvements that have been made around the Corn Exchange and this weekend’s celebrations were a great way of showcasing them to the public.

“Thanks to everyone involved in organising the event and all those who attended – you helped make it a very special occasion.”

“It was fantastic to see so many families here this weekend enjoying the event. The launch of this new public space marks the next chapter for the Corn Exchange.

“This public realm transformation will offer a new place for everyone to enjoy for years to come.”

“We’re very happy that we were able to support this fantastic event and it was great to see people enjoying the new space at the Corn Exchange.

“We’d like to take this opportunity to thank Leeds City Council and everyone else involved in the scheme for the opportunity to deliver these improvements in Leeds city centre.”

Nearly 1,750 square metres of public realm has been created outside the Corn Exchange by upgrading two existing pedestrian areas and removing the stretch of Call Lane that runs between New Market Street and Crown Street.

Funding for this work was supplied by the council, Rushbond and the West Yorkshire Combined Authority, with the latter’s share coming through the Government’s Getting Building Fund.

The highways improvements, meanwhile, have been led by the council’s Connecting Leeds team and have focused on prioritising buses, pedestrians and cyclists while aiming to reduce congestion in the city centre.

“It was great to see so many people making use of this new space to relax.

“Improving cycling and walking forms a key part of my pledge to tackle the climate emergency.

“I’m delighted that the Combined Authority is able to play its part, not only in these schemes but others around our town and city centres, to create more green spaces and space for active travel.”

The Corn Exchange projects – together with public realm initiatives in places such as Meadow Lane, Cookridge Street and Greek Street – underline the council’s commitment to giving Leeds a greener, better connected and more inclusive city centre.

Further information about both the work at the Corn Exchange and the Getting Building Fund can be found here.