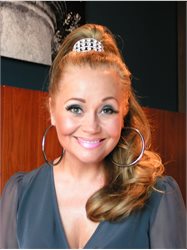 The chart-topping singer Sonia is headlining a programme of free entertainment on Blackpool seafront as part of the resort’s Platinum Jubilee celebrations.

The entertainment will take place on the Comedy Carpet on Thursday 2 June as Blackpool marks the first day of the extended holiday with a grand parade of heritage trams, a giant outdoor picnic, a light and laser show and a burst of fireworks from the top of The Blackpool Tower.

Sonia, who became the first female UK artist to achieve five top 20 hit singles from one album and who finished runner-up in the 1993 Eurovision Song Contest, will be joined by a host of music talent including X-Factor contestants Sami Brookes and Ella Grace, and Britain’s Got Talent finalists, Richard and Adam.

The programme will also include excerpts from some of Blackpool’s leading summer season venues including Pleasure Beach, the Tower Circus and Jersey Beats, as well as performances by home-grown talent.

Here’s the full programme and timings (check the visitblackpool.com for updates).

The parade will see 12 trams from the heritage fleet travel in convoy from the Pleasure Beach to Little Bispham, creating one of the largest tram parades the resort has seen. The convoy, which sets off at 2.30pm, will pause at the Tower Festival Headland for a unique photo opportunity.

Although the historic trams were officially “retired” when new European-style trams were brought into service on the seafront route in 2012, a number of them were retained and thanks to an army of volunteers have been brought back into regular use. They now form one of the finest heritage fleets in the world.

The trams will be carrying hundreds of passengers with some very special guests including mascots from venues attractions including Spongebob and Peter Rabbit.

People will be able to relax at The Big Comedy Picnic, an al fresco eating area opposite The Blackpool Tower, with free live entertainment hosted by Blackpool’s’ very own Hayley Kay. Feel free to buy food and drink from one of the many outlets around the headland area or bring your own picnic, hire a deckchair and enjoy the show! Find out more about the line-up.

During the late evening, there will be further entertainment from local DJ Paul O’Brien before the resort joins the Queen’s Platinum Jubilee Beacon lighting ceremony.

A magical lighting spectacle will be interspersed with a spectacular burst of fireworks at the top of The Blackpool Tower, followed by a Jubilee light show to round off this remarkable occasion.

Further beacons will be lit at 9.45pm from Blackpool Pleasure Beach and the Water Tower – located to the north of Blackpool.

Blackpool is one of thousands of locations and landmarks across the UK where beacons will be lit. In true Blackpool style, it will be adding its own unique twist to the ceremony.

A spokesperson for the Blackpool TBID said:

“In our first full year of operation, we are delighted that our first major event is a celebration to mark such a historic milestone.

“It is a fantastic programme of free entertainment with something for everybody to enjoy. We can’t think of a better way to kick-start the four-day Jubilee holiday and we hope people will come and enjoy not just these celebrations, but everything else that Blackpool has to offer.”

The parade and beacon lighting ceremony form part of an extensive programme of events across the resort to celebrate the special royal milestone. These include: