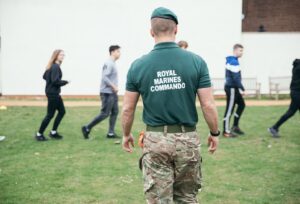 On Saturday 25 June, Activate Learning is celebrating Armed Forces Day, an annual show of support for the Armed Forces community.

Thousands of men and women serve our nation every day, protecting the UK, promoting peace and security, and fighting the ongoing threat of terrorism. Their work helps keep us all safe and inspires a generation to follow suit.

From troops to veterans, cadets and more, today is our opportunity to show them our respect and appreciation.

There are many events taking place across the country. You can find out more about Armed Forces events in your local community and how to take part.

At Activate Learning, we are involved with Armed Forces organisations throughout the year, as part of our commitment to embracing links with the local communities we serve and with the stakeholders representing them.

We are also proud to have Public Services students studying at our campuses, many of whom go on to have successful careers with the British Army, Royal Air Force and Royal Navy, and more.

Here’s how we’ve welcomed the Armed Forces on campus throughout the past year:

Looking after your wellbeing during exam season

Information for parents and guardians of new students