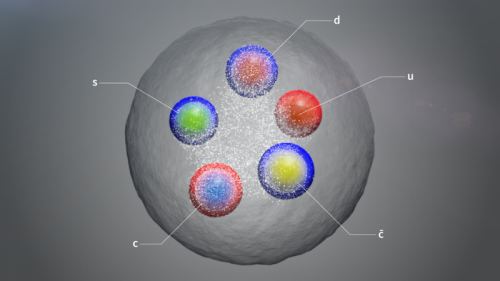 Quarks are elementary particles and come in six flavours: up, down, charm, strange, top and bottom. They usually combine together in groups of twos and threes to form hadrons such as the protons and neutrons that make up atomic nuclei. More rarely, however, they can also combine into four-quark and five-quark particles, or “tetraquarks” and “pentaquarks”. Particles made of quarks are known as hadrons.

While some theoretical models describe exotic hadrons as single units of tightly bound quarks, other models envisage them as pairs of standard hadrons loosely bound in a molecule-like structure. Only time and more studies of exotic hadrons will tell if these particles are one, the other or both.

The discoveries announced today by the LHCb collaboration include new kinds of exotic hadrons. The first kind, observed in an analysis of “decays” of negatively charged B mesons, is a pentaquark made up of a charm quark and a charm antiquark and an up, a down and a strange quark. It is the first pentaquark found to contain a strange quark. The finding has a whopping statistical significance of 15 standard deviations, far beyond the 5 standard deviations that are required to claim the observation of a particle in particle physics.

The second kind is a doubly electrically charged tetraquark. It is an open-charm tetraquark composed of a charm quark, a strange antiquark, and an up quark and a down antiquark, and it was spotted together with its neutral counterpart in a joint analysis of decays of positively charged and neutral B mesons. The new tetraquarks, observed with a statistical significance of 6.5 (doubly charged particle) and 8 (neutral particle) standard deviations, represent the first time a pair of tetraquarks has been observed.

The LHCb experiment hopes to find further exotic particles in the future and start to understand the families in to which they form. The collaboration is starting collecting data with its new detector today for LHC Run 3. Critical elements of this new detector have been designed and assembled in Manchester over the past seven years.