Rare plants make a return thanks to Waterside campus 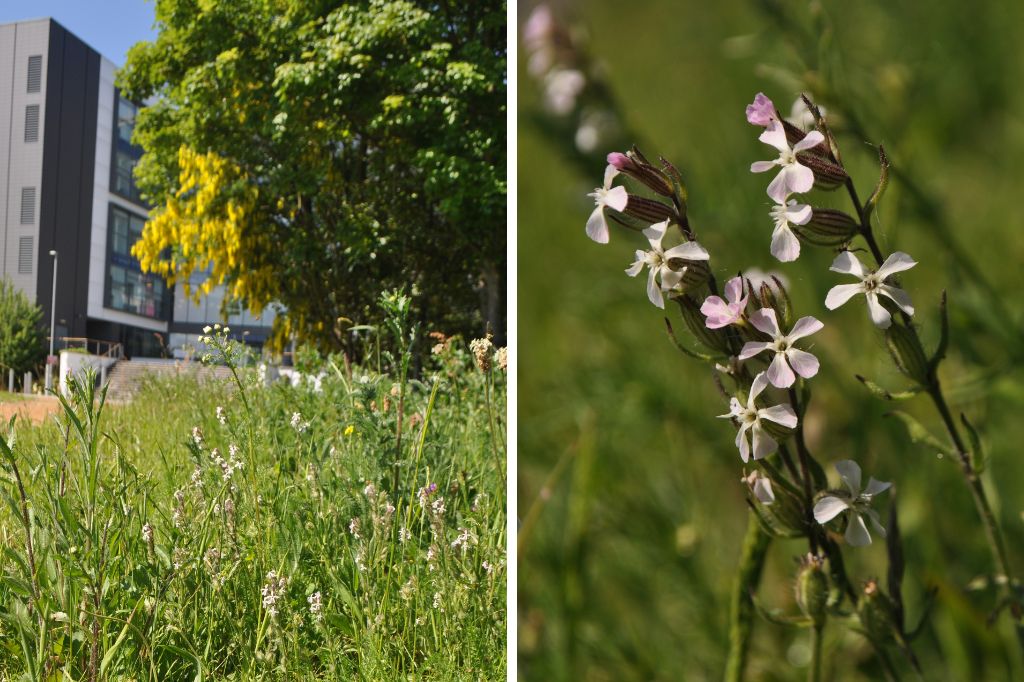 Plants previously thought extinct or rare in the county are making a return to the town thanks to the building of University of Northampton’s (UON) Waterside campus.

This is according to Northamptonshire’s ‘recorder of botany’ Brian Laney who has unearthed fantastic floral finds during his visits to the campus for official bee and plant surveys.

Whilst examining Waterside’s shrubbery Brian has found surprising residents not seen in the county for decades, such as the Small-flowered Catchfly of which there have been no recorded sightings in plant records since 1955.

Other rare species of interest for this area that are popping up around campus include:

Construction of Waterside started in 2015 and was designed with several key considerations, including how biodiverse its grounds should be. The site officially opened in 2018.

Their reappearance is due in part to the uniqueness of a new build and one on such a massive scale as the creation of a new university. Brian explains: “When I discovered the Small-flowered Catchfly, it was a little out of the blue, and had me jumping up and down with happiness!

“There are a few reasons as to why this could have happened, and the most likely are all rooted in Waterside being a new build development. Disturbing the ground can bring seeds that have been underground and long-dormant up to the surface.

“There’s also the fact that soil from other areas of the country brought in to help make Waterside itself contained some of these seeds. These can be ‘reactivated’ by a move to somewhere like Waterside, where ecological conditions are more favourable. Given how the University takes a careful, nurturing and ‘herbicide light’ approach to its grounds management, it’s clear these plants are in the right place at the right time.”

John Howes, External Services Manager at the University, added: “Before building work started on Waterside, we decided our grounds maintenance approach would enable plants to thrive with minimal interference.

“We don’t blanket use herbicides, we treat the perimeter of our campus as an ecology zone itself and we only ‘cut’ plants back at end of the season to let the seed bank in the ground build up.

“What we have achieved is a campus that not only looks attractive but is also a more biodiverse landscape. We’ll continue working with Brian to monitor this and talk about how important plants like the Small-flowered Catchfly are.”

The picture across England is, according to Brian, “depressingly similar”, with an over-reliance on herbicides and pesticides, under management or over management of the environment, climate change creating a ‘perfect storm’ of conditions that make it harder for plants to prosper, as well as a decreasing interest in botanical issues.

So, Brian sets a challenge people at the University and further afield: “The loss of botanists or people with a passion for plants is a generational thing. But as we see with places Waterside, the future can be turned to our advantage, so I hope to work more closely with the University to inspire a new generation of ‘flora friends’.

“Until then, I’m sure there are many undiscovered pockets of the county where the rare plants at Waterside and others are growing. If people spot any plants they think are unusual, I’d like them to drop me a photo on Twitter. You never know, something rare and wonderful might be growing in your garden, where you walk your dog, or a local grassy verge.”

Find out more about our campus and grounds.

Telling stories about working in education, health and social care

Dev puts his future in the fast lane with F1 placement