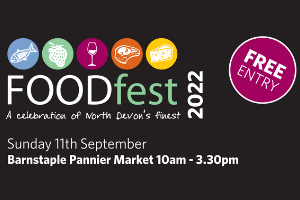 The line-up for the district’s biggest food and drink festival, FOODfest, has been announced! The event, which will take place on Sunday 11 September, is to feature top chefs from some of the district’s best local restaurants who are completely new to the event.

Event organisers North Devon Council are delighted to be bringing the festival back for its 13th year after a two year hiatus due to the pandemic. 2022 will be the 13th year FOODfest has taken place, with popularity increasing year on year since it first launched in 2008.

The council says stall spaces are selling fast so urges potential exhibitors to book their stand while they still have time. Food and drink producers are invited to apply to trade via the council’s website: www.northdevon.gov.uk/foodfest.

The line-up for the day includes the following top chefs:

The event will be hosted by long-time compère Seth Conway, together with Dez Turland, who owns luxury dining business Dez@SV and co-ordinated the FOODfest chef line-up.

Hannah Harrington from Barnstaple Town Centre Manager, says: “We are absolutely delighted with the line-up for FOODfest this year, which features fresh new faces and some incredible talent. After having to cancel the last two year’s events, we are determined to to make this year’s FOODfest bigger and better than ever before. If you want to be a part of it be sure to get the date in your diary – and if you’re a food or drink producer and you’d like to trade on the day, book your space while you still have the chance!”

Leader of North Devon Council, Councillor David Worden says: “FOODfest helps to promote our area and support our suppliers, growers and traders. The event is always a massive boost for the town’s economy, with thousands of visitors enjoying some of the best food and drink our wonderful district has to offer. With such a great line-up, this year’s is sure to be as popular as ever and is a great opportunity for local food producers to showcase their businesses.”

The event’s social media pages (Facebook and Instagram – @northdevonfoodfest) will be updated regularly. Anyone with queries can email vanessa.harrison@northdevon.gov.uk or call 01271 388216.

FOODfest is returning for 2022