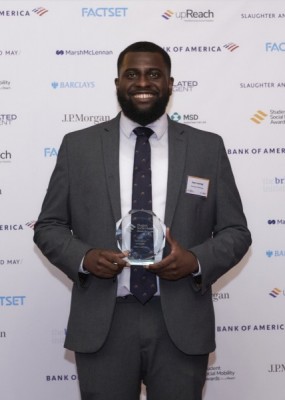 “What comes is next to take the opportunities that follow with an open mind and see what comes out of them. I will see where I can help support people that look like me and come from similar backgrounds to myself. I am involved in several projects this coming academic year and I am excited to see how they unfold.”

As well as his studies Jesy has acted as the National Finance Director of The 93% Foundation, the largest state-educated social mobility network. Jesy also the participated in the pilot for The University of Manchester’s ‘Manchester 10/10’ programme where we look to narrow the attainment gap at the university between Black students and their peers.

Jesy was also awarded the prestigious Stephen Lawrence Scholarship by Freshfields Bruckhaus Deringer law firm, which is designed to address the disproportionate under-representation in large commercial law firms and other City institutions of black men from less socially mobile backgrounds.

All student winners and nominees have managed to find success despite facing socio-economic challenges, such as limited professional networks, juggling multiple responsibilities alongside studying, reduced access to careers support and living in areas with low job prospects. 67% of nominees were the first in their family to attend university, 21% had caring responsibilities and more than half were eligible for free school meals.

Stephanie Lieber, Acting CEO at upReach said: “upReach is proud to have hosted the fourth annual Student Social Mobility Awards and shone a spotlight on both students who have excelled, and the organisations that have paved the way for them to do so. Having overcome significant socioeconomic barriers and mitigating circumstances, these winners and nominees serve as inspiring role models for those from similar backgrounds, encouraging them to set their ambitions high and realise their full potential.”

Diabetes drugs could save thousands of lives

The Final Day with David Attenborough