For one night only! A chance to Ride The Lights 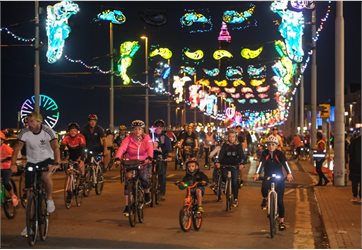 Get ready for one of the most magical nights in Blackpool’s event calendar when, for one night only, the six miles of Promenade will close to give cyclists an opportunity to get a sneak preview of this year’s Illuminations.

Ride The Lights will be staged on the night of Tuesday 30 August – three days before the Illuminations are officially switched on by legendary comic and actor Johnny Vegas.

Bikes of all shapes and sizes can take advantage of the seafront route in a free family event that is suitable for all ages. The Promenade will be closed to traffic from 6.30pm until 10.30pm with the Ride the Lights event starting at 7pm and finishing at 10pm.

Cyclists can participate at any time during that period and are recommended to join the event at either the Starr Gate or Red Bank Road gateways to the promenade.

“Ride The Lights is an extraordinary event that is unique to Blackpool. Where else can you ride a bike in a traffic-free environment under a million shimmering lights!

“It’s a wonderful time for families to come together and enjoy one of the most iconic attractions in the land.”

Full details and safety information can be found here: www.visitblackpool.com/ridethelights

On Wednesday 31 August, Trinity Hospice will stage its annual Night Run, starting on the Tower Festival Headland opposite the Blackpool Tower. Full details at www.trinityhospice.co.uk

Then, on Friday 2 September, it’s the biggest night in Blackpool’s events calendar – the annual Switch-On of the Illuminations in association with MTV.

The celebration will take place in the Tower Ballroom with performances by Blue, Tom Grennan, Mae Muller, plus more talent to be announced, before Johnny Vegas pulls the famous switch to trigger four months of Illuminations.

The concert and Switch-On moment will be live streamed to a global audience across MTV and VisitBlackpool channels, and event organisers are exploring the possibility of streaming the live event to an outdoor audience on the Tower Festival Headland

2021 saw the Tower Festival Headland turned into an outdoor winter wonderland with skating rink, magic forest, snowfalls, log cabins and festive projection shows. We will be unwrapping our plans for the 2022 Christmas season in the coming weeks.

School attendance in Blackpool on the rise