The countdown to the Tour of Britain’s first-ever visit to Dorset for what promises to be one of the most picturesque stages in race history has officially begun.

Today (Wednesday 10 August) marks one month until the UK’s leading cycling event heads to the historic county and promotes it to an international audience. Over 100 of the world’s best riders will tackle a 175.9km (109.4mi) stage that begins on the Esplanade at West Bay (11am) and culminates in the heart of Ferndown (approximately 3pm) on Saturday 10 September.

The route will pass alongside the historic Jurassic Coast, through Abbotsbury, Weymouth, Dorchester, West Lulworth, Corfe Castle, Wareham, Bere Regis, Blandford Forum, Wimborne Minster and Verwood. A large crowd is expected to turn out to watch this free-to-attend sporting spectacle.

Mick Bennett, Tour of Britain race director, said: “Bringing the UK’s biggest cycle race to Dorset is something that has been on our to-do list since 2004. After what has seemed like an incredibly long wait, race day is thankfully fast approaching! It’s going to be great to showcase this wonderful county to a worldwide TV audience.” 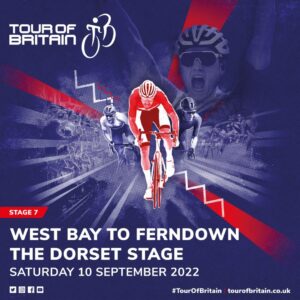 Cllr Ray Bryan, Dorset Council’s Portfolio Holder for Highways, Travel and Environment, said: “Dorset Council has been working closely with Tour of Britain as we prepare to host what promises to be a fantastic event for both casual sports fans and avid cycling enthusiasts.

“I hope as many residents as possible come out next month to make the most of this great opportunity and give a warm Dorset welcome to visiting spectators and competitors. In the meantime, I recommend saving the date in your diary and checking out the route online to
select the best spot to watch the action.”

Ben Ansell, Dorset & Wiltshire Fire and Rescue Service Chief Fire Officer, said: “We are very pleased to welcome the Tour of Britain to Dorset and wish all the riders, and their teams, the best of luck on stage seven.”

A route map and full stage timings are available on the Tour of Britain website. Spectators can watch all the action by the roadside for free.

ITV4 will continue to broadcast live flag-to-flag coverage of every stage and nightly highlights show, allowing fans in the UK to watch wherever they are. The race will also be shown in over 150 countries worldwide, thanks to the event’s partnerships with Eurosport and the Global Cycling Network.

Housing Services to better support those most in need