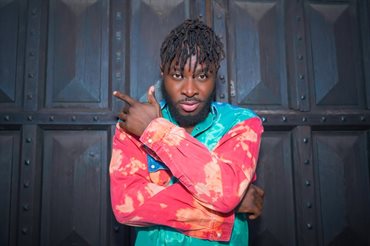 The final two acts have been lined up for Blackpool’s biggest night of the year – the annual Illuminations Switch-On.

The concert, to be staged in association with MTV in the famous Tower Ballroom on the night of Friday 2 September, will be followed by the official switch-on by legendary actor and comedian Johnny Vegas, triggering four months of Illuminations in the resort.

The concert and switch-on moment will be live streamed to a global audience across MTV and VisitBlackpool channels, and event organisers are exploring the possibility of streaming the live event to an outdoor audience on the Tower Festival Headland.

Fuse ODG, a British-Ghanaian Afrobeats singer, is a mainstream superstar within the London rap scene. He has sold over a million records, achieved five UK Top 10 Chart hit singles and been a near permanent fixture on the BBC Radio 1 playlist.

He has also been nominated for an MTV European Music Award and collaborated with artists such as Sean Paul, Wyclef and Major Lazer.  The dancehall remix of Major Lazer’s Light It Up which features the vocals of Fuse ODG, has over 1 billion streams on Spotify alone.

Nina Nesbitt will be appearing at switch-on shortly fresh from a series of summer festival appearances and after supporting Coldplay in two huge concerts at Hampden Park in Glasgow.

Her new album, Älskar, will be released on the same day as the switch-on celebration. It will see her build on the huge accolades she has already received including more than 500 million streams for her previous album, The Sun Will Come Up, The Seasons Will Change.

One of the most magical nights in Blackpool’s event calendar when, for one night only, the six miles of promenade will close to give cyclists an opportunity to get a sneak preview of the Illuminations on August 30.

2021 saw the Tower Festival Headland turned into an outdoor winter wonderland with skating rink, magic forest, snowfalls, log cabins and festive projection shows. We will be unwrapping our plans for the 2022 Christmas season in the coming weeks.

Support for Blackpool residents this No Smoking Day