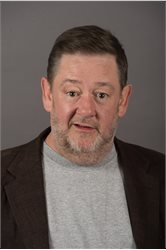 Actor and comedian Johnny Vegas has been forced to pull out of this year’s Blackpool Illuminations Switch-On celebration.

Johnny had been due to pull the famous switch at the end of a live concert in The Tower Ballroom on the night of Friday 2 September.

But, due to unforeseen personal circumstances, he will no longer be able to make the big night.

“Johnny was really looking forward to the event, but it’s just not possible for him to attend. We are now in the process of rescheduling his filming and other work commitments over the next couple of months.”

“Johnny is a huge fan of the Illuminations and we know how much he wanted to pull the switch. We are really sad that he won’t be able to join us, but we fully understand why he can’t make it on the night.

“We look forward to announcing a replacement personality ahead of the Switch-On celebration which is the biggest event in our calendar.”

Johnny, one of Britain’s best-known comic talents, has already provided the “voice” of a seagull that fronts the resort’s biggest ever TV marketing campaign.

The annual Blackpool Illuminations Switch-On concert, which is being staged in association with MTV, will be filmed in front of a live audience in the famous Tower Ballroom. Almost 2,000 tickets for the show were issued via a free ballot that attracted tens of thousands of applications

Hosted by Becca Dudley, the concert will include performances by Blue, Tom Grennan, Mae Muller, Fuse ODG and Nina Nesbitt. It will then be followed by the official Switch-On, triggering four months of Illuminations in the resort.

The concert and Switch-On moment will be streamed to a global audience via VisitBlackpool and MTV channels. Last year, that attracted more than 160,000 views from as far afield as Australia, Canada and the United States. It will also be live-streamed on a specially-erected screen on the nearby Tower Festival Headland.

For full timings and details of the Illuminations Switch-On event, go to: www.visitblackpool.com/switchon

The 2022 Blackpool Illuminations have once again been extended by two months and will shine each night from September 2 to January 2, 2023. For Switch-On times and full details of this year’s display, go to: www.visitblackpool.com/illuminations