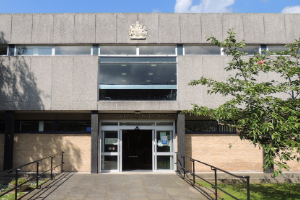 A local man has been prosecuted for committing antisocial behaviour offences in Barnstaple town centre.

Paul Willmore, 57 of 38 Lower Moor, Whiddon Valley, Barnstaple received a £100 fine and was ordered to pay a £34 victim surcharge at Barnstaple Magistrates Court on Tuesday 16 August after he was found to have breached a Public Spaces Protection Order (PSPO) on 24 May this year.

Mr Willmore had been asked to leave the town centre area after swearing and sleeping in a shop doorway whilst under the influence of alcohol or drugs. He refused to leave and was found to have caused harassment, alarm or distress to the public.

The PSPO in place in Barnstaple and Ilfracombe town centres targets nuisance behaviours such as street drinking, drug use, public urination and aggressive begging (using intimidating language or actions, or begging within five metres of a pay point or cash machine). It has been designed with the aim of enabling the council to manage street-based antisocial behaviour more proactively.

Leader of North Devon Council, Councillor David Worden, says: “Antisocial behaviour is committed by a small minority but can have a huge impact on peoples lives and businesses. We are committed to working in partnership with Devon and Cornwall Police and other agencies to ensure North Devon is a safe and pleasant place to live, work and visit. These prosecutions make it very clear to everyone that we take the PSPO terms very seriously and will prosecute anyone who decides to breach them.”

The council recently launched a campaign highlighting the work it is doing to clamp down on antisocial behaviour (#NDCsaysNOtoASB). As part of the initiative, the council organised an ASB partnership action day in Barnstaple town centre last month. Officers from the council’s Antisocial Behaviour team worked alongside colleagues from its Enhanced Outreach and Waste and Recycling teams, as well as partners from the police, Barnstaple in Bloom, Barnstaple Pannier Market and Barnstaple Town Council, to carry out a clean-up and raise awareness of the partnership work being done to tackle ASB.

Further information on the PSPOs in place in Barnstaple and Ilfracombe is available on the council’s website.

Overnight resurfacing on A381 in the South Hams