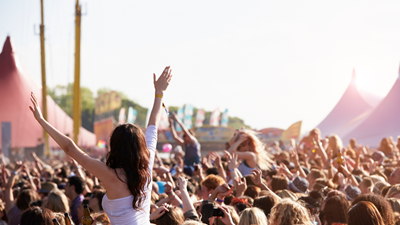 Ahead of Leeds Festival taking place from Wednesday 24 to Monday 29 August at Bramham Park, it’s important that residents are aware of the routes that festival traffic will be taking, upcoming road closures and changes, and alternative routes to take to avoid disruption.

Cars travelling from the south will be travelling up the A1(M) and will be signed via Jct 45 to Grange Moor / Wattle Syke roundabouts and then South on West Woods Road to Thorner Road, left on Thorner Road and then right onto Paradise Way.

Cars travelling from the north will go up the A1(M) and will be signed via Jct 44 roundabout to go north up Paradise Way.

These routes will be used throughout, with particularly heavy traffic on Wednesday 24th August, Thursday 25th August, and the morning of Friday 26th August. This traffic will be travelling one way in.

From 9pm Sunday 28th August, the routes reverse as festival goers will leave along the same routes but in the opposite direction. This traffic will be travelling one way out and Monday morning will be another peak period.

Pick Up Drop Off festival traffic will follow a route that starts on the A1(M) and requires all traffic to exit via Jct 44 and join York Road (A64) Westbound. Traffic will then enter the site on a right turn.

New for 2022, the one-way system on the A64 will this year be in place for the duration of the festival.  From 4am on the Wednesday to 3pm on the Monday, the A64 between the Fox and Grapes public house and the A1(M) / A64 roundabout will be closed to all traffic travelling Eastbound (i.e. from Leeds to York).

From 9pm on the Friday to 3am on the Saturday and 9pm on the Sunday to 3pm on the Monday, West Woods Road will be closed at its junction with Wattle Syke for Southbound traffic.

From the Wednesday to the Monday, Kiddal Lane will be closed at the junction with the A64 / York Road and Potterton Lane.

Use routes via Clifford / Boston Spa / Tadcaster but avoiding the A1 (M) / Grange Moor / Wattle Syke roundabouts throughout at the peak times of 8am to 6pm daily when peak incoming traffic is anticipated. And from 7am to 3pm on the Monday 29th when festival traffic will be leaving.

If Thorner residents require access to the A1(M) from Wednesday 24th August to Sunday 28th August, we would suggest travelling along Thorner Road, turning left on West Woods Road and travelling north to access the A1(M) at Wattle Syke.

Residents wanting to travel east, who would normally use the A64, please use the new East Leeds Orbital Route (ELOR) junction, follow ELOR to the A58 and use the A659 to access the A1 south to York Road. Or, travel south along ELOR from Leeds Road to join the M1 north bound and join the A64.

If you would normally use the A64 eastbound to travel back to Bramham village, please use the A64 Eastbound from Seacroft to the new ELOR junction, follow ELOR to the A58 and follow the A58 towards Wetherby and then to Boston Spa. Access Bramham village from Boston Spa via Clifford Moor Road, Bramham Road to the village. This route will avoid joining the route of any festival traffic which will be utilising West Woods Road and Paradise Way for the duration of the festival and have the potential to involve delays to your journey.

If you would normally use the A64 eastbound to travel back to Thorner village, you will be able to follow the A64 from Seacroft Eastbound to the new junction with ELOR, follow ELOR towards A58 to the roundabout with Skeltons Lane and access Thorner via Skeltons Lane.

Alternatively, Thorner can be accessed via the A58 which should be relatively free of festival traffic.

Recommended routes from the village to the A1(M) would be via Carr Lane to the A58 to Wetherby and either J45 or J46 A1M – in order to avoid the main festival traffic routes. Also exiting the village via Skeltons Lane to ELOR and following to the M1 South or North.

More information for residents regarding Leeds Festival, including times of opening and contacts for noise complaints, can be found at https://www.leedsfestival.com/local-residents

Leeds waterfront set to shine as festival returns with a splash