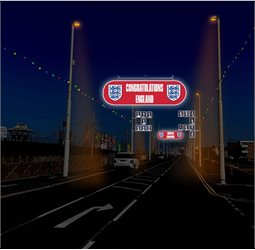 A special tribute is to be paid to England’s all-conquering women’s football team in this year’s Blackpool Illuminations display.

The portraits of manager Sarina Wiegman and her 23-player squad will be put up in lights in a new promenade display celebrating their amazing triumph over Germany in the European Championships final.

The team captured the nation’s hearts after a stunning victory at Wembley Stadium on July 31. On the night of the game, the famous Blackpool Tower was lit in red and white to mark the occasion.

Now the resort’s Illuminations manufacturing team have gone a step further by creating a tribute that will remain in place for an extended four-month autumn and winter season.

“The Lionesses created a special moment in football history and we are pleased to be able to recognise their achievement with a place in one of the UK’s most iconic tourist attractions.

“We are delighted that the Football Association has given us the go-ahead to celebrate the enormous legacy that they have created for women’s sport in this country.”

The Lionesses’ display is one of a number of new features in this year’s Illuminations which will start on September 2 and run until January 2, 2023. It also includes a series of Art Deco-inspired installations on the Golden Mile, created by designer Laurence Llewelyn-Bowen.

The Illuminations season will be officially launched at the annual Blackpool Illuminations Switch-On concert, which is being staged in association with MTV in the Tower Ballroom on Friday 2 September. It will be streamed to a global audience via VisitBlackpool and MTV channels.

Last year, the live stream that attracted more than 160,000 views from as far afield as Australia, Canada and the United States. The show and Switch-On moment will also be live-streamed on to a specially-erected screen on the nearby Tower Festival Headland.

The concert, which will be hosted by Becca Dudley, will include performances by Blue, Tom Grennan, Mae Muller, Fuse ODG and Nina Nesbitt. It will then be followed by the official switch-on, triggering four months of free-to-view Illuminations in the resort.

For Switch-On times and full details of this year’s display, go to: www.visitblackpool.com/illuminations

Civil Service to relocate over 3,000 staff to Blackpool Town Centre