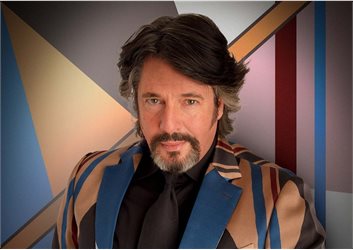 TV celebrity and designer Laurence Llewelyn-Bowen is to turn on this year’s Blackpool Illuminations.

The star of Channel 4’s Changing Rooms will pull the famous switch at the end of a live concert in the Blackpool Tower Ballroom on Friday 2 September.

He replaces actor and comedian Johnny Vegas who announced last week he was being forced to pull out of the Switch-On ceremony due to unforeseen personal circumstances.

Laurence has collaborated with the Illuminations team for several years, designing a number of spectacular features and installations.

His appearance as Switch-On star this year coincides with the unveiling of a dazzling makeover for the Golden Mile in which Laurence has created a stretch of Art Deco-style features that will celebrate a golden age of 1930s glamour.

The 21 overhead light installations form a brand new section entitled Neo Neon in front of The Blackpool Tower. Each measuring almost 14 metres in length, the installations are divided into three separate styles – arches, wings and fans. Together, they will create a stunning new look on the resort’s best-known stretch of promenade.

“The Blackpool Illuminations represent something really special in the hearts of the British people and I am thrilled to be able to pull that famous switch in the magnificent Tower Ballroom.”

“Laurence is one of our greatest ambassadors and it is fitting that he should be pulling the switch in a year when he completely reimagined how the Golden Mile will look during the autumn and winter seasons.”

The annual Blackpool Illuminations Switch-On concert, which is being staged in association with MTV, will be filmed in front of a live audience in the ballroom. Almost 2,000 tickets for the show were issued via a free ballot that attracted tens of thousands of applications.

Hosted by Becca Dudley, the concert will include performances by Blue, Tom Grennan, Mae Muller, Fuse ODG and Nina Nesbitt. It will then be followed by the official Switch-On, triggering four months of Illuminations in the resort.

The concert and Switch-On moment will be streamed to a global audience via VisitBlackpool and MTV channels. Last year, that attracted more than 160,000 views from as far afield as Australia, Canada and the United States. It will also be live-streamed on a specially-erected screen on the nearby Tower Festival Headland.

For full timings and details of the Illuminations Switch-On event, go to: www.visitblackpool.com/switchon

The 2022 Blackpool Illuminations have once again been extended by two months and will shine each night from September 2 to January 2, 2023. For Switch-On times and full details of this year’s display, go to: www.visitblackpool.com/illuminations

Blackpool Illuminations remain one of the UK’s most endearing and enduring tourist attractions, having shone for more than a century.

Blackpool was one of the first of 101 towns in the UK to secure funding from the Government’s £3.6bn Towns Fund. With the help of this support, funds were allocated to upgrade the Blackpool Illuminations to attract additional visitors by developing new features and lighting technology.

“This newly-designed section is spellbinding, taking visitors on a colourful and evocative journey through the nostalgic era of the thirties. It showcases the true creativity of Laurence and our talented in-house Illuminations team.”

Other features to be unveiled during this year’s Illuminations season and associated Lightpool Festival (which runs from October 14-29) include the biggest ever standalone installation, Odyssey, which has been co-created by international designer Jack Irving and a team from Lancaster University.

Queen of ballroom to switch on Blackpool Illuminations 2021

Appeal for old equipment to be returned