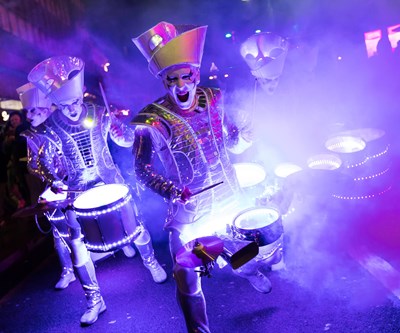 The streets of Leeds will be transformed into an incredible illuminated playground when Light Night returns to the city this October.

More than 50 spectacular light installations, dynamic projections and interactive artworks are set to wow tens of thousands of visitors to the city’s annual cultural spectacular on October 13 and 14.

This year’s event will have the theme of Playful City, with some of Leeds’s most recognisable landmarks and locations hosting spellbinding installations aimed at encouraging visitors to engage and interact with the city in new, fun and innovative ways.

Highlights at the highly-anticipated, free two-night festival will include a thrilling, large scale projection on The Queen’s Hotel, which will take the people of Leeds on a futuristic, digital rollercoaster ride.

At Leeds Civic Hall, a homage to the classic video games of the 1980s will see visitors take control of a high tech augmented reality experience, played out across the historic building’s impressive façade.

At Leeds Art Gallery, local artists Akeelah Bertram and Adam Glatherine’s installation will turn sounds into a cascade of colour and light across a network of eight-foot tall pipes, while at the Leeds Playhouse, a giant, luminous slinky will tumble end over end from the rooftops around the city’s famous theatre.

The popular Spark drummers will also be back with a unique performance at Trinity Leeds, while the historic lifting tower on Wellington Place will be the backdrop for a projection that will give a modern twist to the tale of Rapunzel.

Councillor Jonathan Pryor, Leeds City Council’s executive member for economy, culture and education, said: “Year after year, Light Night sets the standard for culture in Leeds, showcasing in truly spectacular fashion the very best of our city’s artistic ambition and ingenuity. Light Night is also one of the best examples of the integral role that culture plays in raising the profile of Leeds and acting as a huge catalyst for the local economy.

“This year, we’re especially excited to be encouraging families and people of all ages to come together, play and interact in some of the city’s most well-known locations and spaces. The value of collective experiences and simply being together has become more apparent than ever over these past few years, and we can’t wait to see the city animated and brought to life by both these stunning installations and the people who make Leeds such a special place.”

Now in its 18th year, Light Night Leeds regularly attracts more than 100,000 people to the city centre over its two nights.

Each installation will take place in a series of zones, each generously sponsored by a local business or organisation.

This year, Light Night events will also take place outside the city centre, with an illuminated swim at Bramley Baths and a special light-themed play session at Left Bank.

More details about the programme will be announced in the coming weeks.

Join the conversation about conservation and help shape Mabgate’s future