People have one last opportunity to sign a book of condolence to Her Majesty Queen Elizabeth II during the Lord Mayor’s Coffee Morning at Exeter’s historic Guildhall.

All proceeds from the coffee morning, on Saturday 24 September, go to the Lord Mayor’s charity the Exeter Dementia Action Alliance. The event takes place from 10am to 1pm.

Thousands of people have signed books of condolence in Exeter over the last two weeks at the historic Guildhall, Exeter Cathedral, RAMM and County Hall.

The Lord Mayor of Exeter Cllr Yolonda Henson also took part in a tour of the city, taking books of condolence to locations including care homes, the Royal Devon and Exeter Hospital and Exeter Prison.

The Lord Mayor said: “It has been an honour to take books of condolence to care homes and other locations around Exeter. I was pleased to be able to meet the Governor and staff during my visit to Exeter Prison, and the staff and patients at the Royal Devon & Exeter Hospital.

“We said that where people could not come to us, we would come to them – and that is what we have done. A very large number of people have now signed books of condolence in Exeter as a mark of respect to Her Majesty Queen Elizabeth II, and I thank them for doing so.

“I look forward to seeing as many people as possible for the Coffee Morning on Saturday.”

Books of condolence have now closed at all locations other than the Guildhall. They will close at the Guildhall after the Lord Mayor’s Coffee Morning on Saturday. 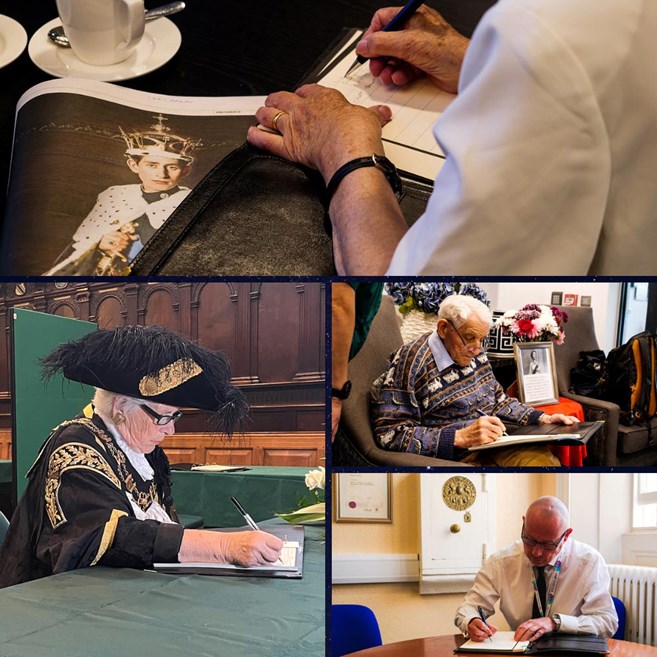 Stay cool in Exeter during the heatwave

Residents reminded to register and not lose their right to vote

Councillors would like to hear from residents and groups about homelessness

Charity helps kit out homes struggling with cost of living