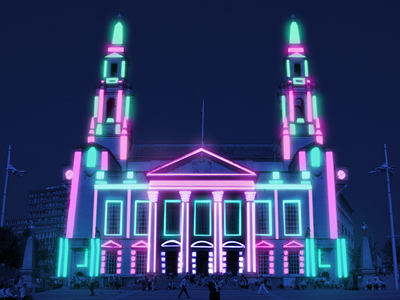 The historic face of Leeds Civic Hall will be transformed into an incredible retro video game as visitors get to take control of this year’s Light Night Leeds.

Using the latest projection mapping technology, artists Focal Studios will combine past and future on October 13 and 14 when they bring their creation LUX to the iconic building on Millennium Square in what the artists say will be Europe’s biggest ever interactive projection.

Using a special control pod inspired by classic 80s sci-fi and retro-futuristic games, players will use contactless gestures to guide a digital ball around the face of the civic hall during the highly-anticipated annual cultural spectacular.

Dennis Outten, managing director of Focal Studios, said: “LUX is essentially a projection mapped game custom made to fit the geometry of whatever building it is played on. It is a hybrid between crazy golf and pinball where the player must traverse the building to get to a goal by directing their player ball up and around the building.

“I had the idea for LUX when thinking about how projection mapping could be more interactive with our built environment. The expectation of audiences at productions and events has increased as technology has become more accessible.

“I began to think, wouldn’t it be cool to allow people to interact and play with a building, rather than just watching video projections on the building? We interact with technology every day in a multitude of ways, why not translate that into a video game using a building as the game surface. It’s like gaming on a whole new level.”

LUX made its debut at Liverpool Light Night 2021 and Derek said the artists couldn’t wait to bring an even bigger version to Leeds.

Derek added: “Leeds is a great city full of wonderful architecture, people and good places to visit. We’ve visited Light Night many times and always been blown away by the creativity and innovation on show in the artwork.

“When we made LUX on the Bombed Out Church in Liverpool it was the largest interactive projection game in the UK. Turning the iconic civic hall into LUX will make it the largest in Europe.”

LUX will be among 50 illuminated installations which will take over famous locations and spaces in the city centre for the 18th edition of Light Night Leeds, which this year has the theme of Playful City.

A programme of impressive artworks from across the world will be hosted in a series of zones, each generously sponsored by a local business or organisation.

Councillor Jonathan Pryor, Leeds City Council’s executive member for economy, culture and education, said: “Year after year, Light Night sets the standard for culture in Leeds, showcasing in truly spectacular fashion the very best of our city’s artistic ambition and ingenuity. Light Night is also one of the best examples of the integral role that culture plays in raising the profile of Leeds and acting as a huge catalyst for the local economy.

“This year, we’re especially excited to be encouraging families and people of all ages to come together, play and interact in some of the city’s most well-known locations and spaces. The value of collective experiences and simply being together has become more apparent than ever over these past few years, and we can’t wait to see the city animated and brought to life by both these stunning installations and the people who make Leeds such a special place.”

The Light Night team has also been working to ensure this year’s event is as energy efficient as possible, including reducing dependence on generators, using green generators where they can as well as working with artists to encourage them to use energy efficient equipment in their installations.

Leeds celebrates 70 years of British achievement, creativity, and diversity with a specially commissioned street photography exhibition for the Platinum Jubilee.