A team of highly committed professionals whose combined media experience exceeds 100 years are starting a revolution. Their mandate is to win one billion people to Christ through a new brand of TV that will stream the message of Jesus Christ into every nation, a feat never before accomplished.

WhatTV is not just a catchy phrase, but also an acronym that carries deep meaning: World healing and transformation. Their brand name —What, is also a question, conveying the approach of answering important questions from a Christian worldview. In essence, WhatTV gives answers to ‘what’ people are looking for through innovative TV media (stories, news, shows, music, vlogs, etc.), which promotes healing and transformation.

Since no single channel can serve the media interests of the entire world, WhatTV are launching multiple channels, each one serving the cultural needs of every region of the world. From their flagship studio in Boston, MASS (Boston’s only Christian TV station), they are producing content for their North American, Latin American and Arabic channels. Content for their South Asian channel is produced from Birmingham, England, while content for their Russian, Persian, Hellenic and Turkish channels will be produced from their Cyprus studio by early 2020. To cover the rest of the world, two additional studios are planned by the end of 2020; one in London for the UK, Europe, and African regions, and the other in Thailand for the East Asian region.

Dr. James Sideras – President
With 25 years business experience, James earned his doctorate at the University of Hertfordshire after growing his own award winning UK business. James also travels the nations as a Christian evangelist.

Danny Choranji – South Asia Director
Danny was with the BBC for 13 years as both presenter and producer. He won a national award for his Asian family program ‘Eastern Beat’ and his musical band, DCS, won double platinum. 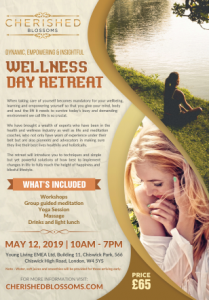 Cherished Blossoms’ Luxury Life Coaching packages feature single or multi-day retreats at the Corinthia Hotel in London. Clients will receive coaching from Cherished Blossoms’ founder and life coach Cynthia Jackson and will learn how to improve health and well-being, gain self-confidence, rediscover their purpose in life, and more, all while enjoying pampering at Espa Spa & Leisure at the Corinthia. Five different packages are available to meet clients’ needs, and dates are flexible.

For those looking for more focused sessions on health and wellness, Cherished Blossoms offers two packages to meet clients’ needs. The one-day Luxury Wellness Retreat will be offered on May 12, 2019, and can accommodate single registrants or small groups. This retreat will give attendees strategies to rejuvenate their mind, body, and soul so they can lead happier and healthier lives. For those looking for more comprehensive services, Cherished Blossoms will soon be launching 4-day international Luxury Wellness Retreats as well.

To learn more about Cherished Blossoms and all of its services, and to schedule, a life coaching or wellness retreat, visit https://cherishedblossoms.com/.

About Cherished Blossoms: Cherished Blossoms is a London-based provider of lifestyle services including luxury life and health coaching, floral arrangements, event planning and hamper gifts founded by Cynthia Jackson, a certified life coach. The company infuses all services with simple luxuries any client will appreciate and delivers them with the utmost professionalism while exceeding their clients’ expectations, every time. To learn more about Cherished Blossoms and all of its services, visit https://cherishedblossoms.com/.