Random number generators: How do they work for online games?

Ever since the online gaming industry started to boom in the late noughties, the popularity in the vast choice of casino games has also continued to soar with the latest technological advances making users’ experiences as realistic as ever. Thanks to the graphics, themes, imagery and sounds, playing your favourite online games has never been more exciting.

It’s all well and good making said improvements to heighten the players’ experience, but how do the bookies ensure everything is fair and above board? For games such as roulette, slots and poker, random number generators (RNG’s) are used to make sure that each and every ‘turn’ or spin is unique from the last; and payouts are distributed fairly as well. RNG’s are used in pretty much every game you play online, including Paddy Power games, so let’s take a closer look to see how they are used in online casino games.

What is a RNG?

In layman’s terms, a random number generator is a device that produces a combination or sequence of numbers and/or symbols and will not display any distinguishable patterns. Random number generators can’t be reasonably predicted, hence why they are called random. They are predominantly used in the online gambling industry, but are widely used in IT security applications, chip manufacturing and government purposes. 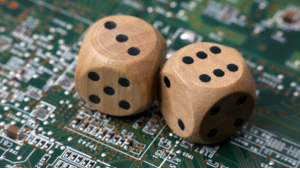 There are two types of RNG’s that are currently in use: Hardware Random Number Generator and Pseudorandom Number Generator. The former is mainly used for land-based casinos and will typically require a device to be connected to the casino’s server. Hardware RNGs require an algorithm, and they don’t need any external input numbers to produce an output. Essentially, new numbers are constantly being produced and then using a mathematic equation to determine a random number.

The Pseudorandom Number Generator is what is commonly used for the online gaming industry, and requires code using mathematical algorithms in a specific order to produce numbers. The algorithm is constantly working and is continuously calculating the next result, even before the player has played their turn. Pseudorandom Number Generators rely on several mathematic equations to determine the outcome of each number/sequence produced.

How they work in casinos

In essence, the RNG works in a way to determine the fairest and most random results possible. There will always be a starting point or number and the generator is constantly working and calculating the newest value, staying true to its algorithm. As earlier mentioned, RNGs are used in practically every online game available, but to give you a more thorough idea, slot machines are a good example to demonstrate how RNGs work.